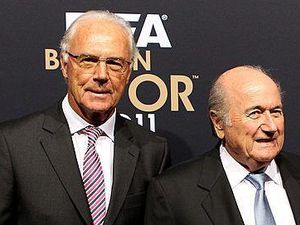 Three former German football officials and ex-FIFA Secretary General Urs Linsi will go on trial on Monday in Switzerland over suspicions that Germany bought votes to obtain the 2006 World Cup.

The three defendants have indicated that they will not be present at the hearing in Bellinzona for a variety of reasons, including fear of travelling because of coronavirus contagion.

They are accused by the Swiss Federal Prosecutor's Office (BA) of concealing from the DFB the true destination of a transfer of 6.7 million euros ($7.6 million today), paid in 2005 by the organizing committee to former Adidas boss, the late Robert Louis-Dreyfus, via FIFA.

The case of former World Cup organizing committee chairman Franz Beckenbauer is being heard separately because of the former Germany captain's poor health.

The investigation was prompted by a report in German publication Der Spiegel in 2015 that Germany had used a secret fund of 10 million Swiss francs (6.7 million euros at the time) to buy votes and obtain the rights to host the competition at the expense of South Africa.

Beckenbauer is suspected of having asked Louis-Dreyfus, to contribute to this fund shortly before the vote on the host in the summer of 2000.

Louis-Dreyfus was allegedly reimbursed by the German Football Association on the pretext of expenses related to a FIFA gala evening, which ever took place.

Zwanziger, Niersbach and Schmidt have also been charged with tax fraud in Germany and the case is expected to come to trial in the coming months.