In Northeast Syria, US and Russia in Fragile Coexistence 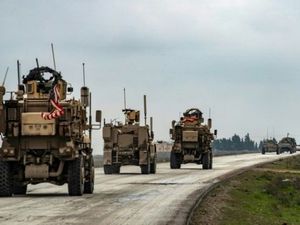 On a Syrian highway, Hussein Abdel Hamid recently found himself trapped inside his car. A US army patrol had encountered Russian tanks down the road, neither allowing the other passage.

The incident two weeks ago is not a rare sight in war-torn northeastern Syria, where Russian and US forces demonstrate a fragile coexistence despite backing opposite sides in the nine-year conflict.

"Just like taxis," they keep trying to cut each other off on the road, he added.

A staunch opponent of the Syrian regime, Washington first deployed troops in northeast Syria in 2014 as part of a coalition to combat the Islamic State group.

Russia, for its part, has militarily backed the government of President Bashar al-Assad since 2015, but did not deploy its forces in the northeast until late last year, following a Turkish invasion against Kurdish fighters.

Turkey's offensive in October was spurred in part by US President Donald Trump who said he was pulling his forces out of border areas in the northeast.

Feeling abandoned by their erstwhile allies in the anti-IS battle, the Kurds turned to Damascus and Moscow to prevent a deeper incursion into their region.

Since then, Russian soldiers and American troops have rubbed shoulders in Kurdish-held territories, where their patrols cross paths regularly, flags fluttering simultaneously on opposite sides of the road.

"I think the joint presence of Russia and the United States in northeastern Syria is an exceptional situation," said Syria researcher Samuel Ramani.

In a video shared on social media in February, a US military vehicle is seen nudging a Russian armoured vehicle that was trying to overtake it off the road.

But the presence of Russian troops has also helped US forces avoid a face-off with Syrian regime forces.

In early March, two American armoured vehicles found themselves only 50 metres (yards) from a Syrian army position and had to wait for the return of a Russian patrol in order to leave, local sources said.

In February, Moscow said Russia came to the rescue of American troops who came under attack by Assad loyalists who opened fire and tried to block its passage.

Despite all these tensions, Ramani said he thought "the risk of a major confrontation is very limited".

"Russia and the US might not have much experience with close geographical proximity, but they have a history of fighting in tandem on opposite sides in the Syrian civil war," he said.

Charles Thepaut, of the Washington Institute for Near East Policy, agreed that "neither the Russians nor the Americans are interested in direct confrontation".

But these incidents did however "show how fragile the situation is on the ground".

"The concentration of forces hostile to each other... in a small area where everybody has to use the same roads makes things dangerous," he added.

Syria is the only country in decades to have seen both American and Russian forces on the ground at the same time.

In February 2018, US-led coalition strikes killed dozens of regime and allied fighters near oil and gas installations in eastern Syria.

Moscow said five Russians were likely among the victims, blaming the incident on a "lack of co-ordination" by the pro-Assad group with Russian command.

But today, deconfliction channels in place since 2015 to prevent any clash between the Russians and the Americans seem to be bearing their fruit.

Any escalation will likely be contained, "unless one of the parties really wants to show strength," Thepaut said.

But long term, both sides have very different goals.

Although Trump in October said he would withdraw US troops from Syria, he later added that at least 500 personnel would remain, including to protect oil installations in the east.

"The goal of Russia is to get all US troops to leave Syria to reinstall the regime in all of Syria, which is impossible with US troops on the ground," Thepaut said.

"Their goal is also to pressure the (Kurdish-led) Syrian Democratic Forces to negotiate with the regime."

Caught between both sides, the SDF find themselves having to deal with both the Russians and the Americans if they want to salvage some of their semi-autonomy in Syria's northeast.

Residents say they hold little hope in either side.

"We no longer trust the Americans or the Russians," said 61-year-old Yaqub Kassar.

"All countries are only looking out for their own interests."