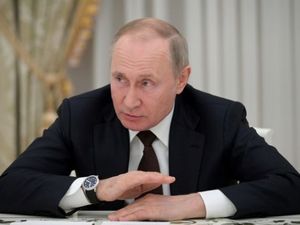 Russian lawmakers vote Tuesday on a package of constitutional reforms as President Vladimir Putin looks to put his stamp on the country for decades to come.

The reforms -- expected to sail through the lower house State Duma in the key second reading -- will overhaul Russia's political system and enshrine conservative values in the country's basic law.

Critics have accused Putin of planning to use the proposals to hold on to power after his current term expires in 2024.

Others suggest that after more than 20 years in power, Putin is preparing for a smooth succession, amid fears of a chaotic struggle for power when the longtime leader goes.

"This isn't about me," Putin, 67, said at a meeting with the public in the central city of Ivanovo on Friday.

"We are proposing amendments not for five or 10 years but at least for 30 to 50 years. This is not about now."

Putin shocked the country by announcing the reforms during his state of the nation speech in January, with Prime Minister Dmitry Medvedev's unpopular government resigning a few hours later.

They will be the first major changes to Russia's constitution since 1993, when a new basic law was adopted following the collapse of the Soviet Union.

The reforms will give parliament the power to choose the government, while strengthening some presidential powers and increasing the role of the State Council, an advisory body.

This fuelled speculation that Putin could stay on after 2024 as the head of the State Council, though he has denied any wish to remain in power.

Some proposals aim at boosting living standards, including a guaranteed minimum wage and state pensions adjusted to inflation.

And -- in line with Putin's strongly conservative views -- the reforms would enshrine a mention of Russians' "faith in God" and spell out that marriage is a heterosexual union.

The State Duma, dominated by Putin's allies, unanimously approved an initial version of the reform bill in a first reading in late January, after less than two hours of debate.

The session for the second reading began at noon (0900 GMT) on Tuesday.

A third reading -- largely considered a final technicality -- may take place as early as Wednesday. The upper house Federation Council has also put the reforms bill on its agenda for Wednesday.

Putin has promised a public vote on the reforms once they are approved by parliament, though it is unclear exactly what form that vote will take. A date for a plebescite has been set for April 22.

Russia's opposition, including Putin's most prominent critic Alexei Navalny, have criticised the proposals, but there has not been an upswell of public resistance.

An editorial in business daily Vedomosti called the proposed amendments a "conservative manifesto" -- the political legacy that Putin wanted to leave to future generations.

Political commentator Maxim Trudolyubov said it was a plan to immortalise Putin's legacy.

Writing in the Russian edition of Forbes, Trudolyubov called the new legislation an attempt to "codify Putin", in other words "to create an undying political body that will be able to live longer than an average mortal president".

It is unclear why Putin is pushing ahead with the reforms now, though some observers say he is anxious to head off a power struggle as he approaches his term limit.

Others have pointed to Putin's flagging poll numbers since his re-election in 2018, as Russia's economy struggles under the weight of Western sanctions and as living standards fall.

The economy is set for more turbulence in the coming weeks and potentially months after oil prices crashed following the collapse of the production limits deal between Russia and Saudi Arabia.

Russia's economy is heavily dependent on energy exports. The ruble tumbled to a four-year low on Monday and the RTS stock index dived more than 10 percent at Tuesday's opening.

Russia has huge financial reserves to weather these kinds of crises, but Putin had planned to tap the funds for a series of major infrastructure projects.