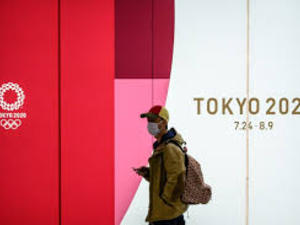 Preparations for the Tokyo 2020 Olympics this summer are going ahead "as scheduled," organizers insisted on Wednesday, while acknowledging they are "concerned" about the spread of the new coronavirus.

Tokyo 2020 president Yoshiro Mori made the comments after a member of the organizers' executive board sounded the alarm on the virus outbreak, warning postponing the Games for two years might be the best option under the circumstances.

But Mori dismissed that option, as did Japanese Olympic minister Seiko Hashimoto, who told a parliament committee that postponing or cancelling the Games was "inconceivable."

"Of course we are concerned," Mori told reporters, conceding the outbreak that has infected more than 117,339 people worldwide and caused 4,251 deaths will have some effect on the Games.

But "as the organizing committee, it is only natural for us to move forward with our work as scheduled," Mori added.

He said the World Health Organization, which has been consulting with the International Olympic Committee (IOC) and organizers in Tokyo, was expected to announce its "basic thoughts soon".

Mori's comments came at a hastily organised briefing called after executive board member Haruyuki Takahashi made a splash in interviews warning that preparations should be made for a postponement.

Takahashi told Japan's Asahi Shimbun daily it would be ideal to hold the Olympics as planned but "there has to be an alternative plan."

"The coronavirus has become a global problem. We can't just hold it (the Olympics) because Japan is OK," he told the daily.

He said the summer two years from now "offers the best possibility" for a postponement, given the international sporting calendar, adding that "preparation must start now" if a delay is on the cards.

He insisted that it would be "impossible" to cancel the Games altogether, and said he was speaking out as "a warning bell" for the organizing committee, adding that he would raise the issue at a board meeting later this month.

"It needs to face the current situation and consider, with sports associations, measures to take in case of postponement."

Mori said a postponement was impractical, noting that many of the Olympic venues might not be available in two years.

"This is not something that you can delay one or two years and make it happen," he said.

"Honestly I thought the statement was out of line," he said of Takahashi's remarks, adding he had asked him to consider his comments more carefully.

The organizers also distanced themselves from Takahashi's remarks in a statement, stressing that the IOC has consistently said the Games are going ahead as scheduled.

"We sought clarification from Mr. Takahashi. He stated he had inadvertently given his personal opinion in response to a hypothetical question," they said.

And Olympic minister Hashimoto also said alterations to the schedule were not on the cards.

"From the viewpoint of athletes who are the main protagonists in the Tokyo Games, as they are making adjustments and preparations for this once-in-four-years event... it is inconceivable to cancel or postpone," she told a parliament committee.

She conceded that "it is the IOC (International Olympic Committee) who will make a final decision on the Games".

"We think it is important that the government gives correct information so that the IOC makes an appropriate decision," she added.

The rapid spread of the virus, which has infected more than 560 people and been linked to 12 deaths in Japan, has already cast a shadow over preparations for the Games.

Test events have been altered, qualifiers affected, and the Olympic torch ceremonies are being scaled back.

The hugely popular high-school baseball tournament was the latest victim of the virus, organizers announced on Wednesday.