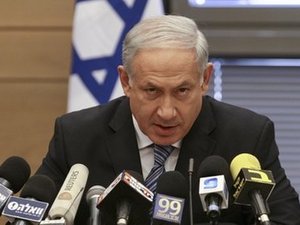 Israel on Wednesday was discussing the format of an investigation into its deadly raid on a Gaza-bound flotilla, but Prime Minister Benjamin Netanyahu insisted soldiers would be off-limits.

Israel was in talks with "several members of the international community" about the investigation, Netanyahu said, stressing that it should focus on "the pro-Palestinian activists who fought the naval commandos with knives and clubs."

He insisted the soldiers involved would answer only to the Israeli military, saying "that is how the armed forces of our friends in the world always act and that is how we shall also act."

Israel has been trying to work out how to get U.S. backing for a limited probe into the deadly raid and was reportedly considering easing its blockade on Gaza, which the activists had hoped to break.

U.S. President Barack Obama said on Wednesday he expected Israel to comply with the demands of the U.N. Security Council, and that it was in everyone's interests -- including Israel's -- to get the "facts."

Netanyahu stressed that Israel already knew the facts and that investigators should look at questions "which the international community prefers to ignore."

"Who was behind the group of extremists on the deck of this ship? Who financed this gang? How did axes, clubs, knives and other weapons find their way on board the ship? What were large sums of money doing in the pockets of these people on deck and for whom was this money intended?"

He spoke after he and the other members of the Forum of Seven senior ministers met behind closed doors to discuss the mandate of the proposed investigating team in the face of world calls for a far wider probe.

"Contacts are continuing with Washington to obtain its approval over the outlines of such a commission," a senior official said.

The plan in its current form entails a panel of Israeli jurists, joined by an American and a European observer, media reported.

The Haaretz daily said the panel would lack powers such as the right to issue subpoenas, and that its recommendations would not be binding.

The raid on the ships plunged Israel into a diplomatic crisis and led Netanyahu to postpone a trip to Washington.

He now plans to meet Obama later this month, following a visit by Palestinian president Mahmoud Abbas to the White House on Wednesday in which Obama pledged 400 million dollars in U.S. aid for the Palestinians.

The talks come as the deadly raid turned the spotlight on the blockade which Israel imposed on Gaza in 2006 after the capture of one of its soldiers and tightened the following year when the Islamist Hamas movement seized power.

Britain's Daily Telegraph had earlier reported that Israel is set to accept a plan under which it would ease the blockade in return for the international community agreeing to a limited probe into the raid.

International opposition to the blockade has gained momentum in recent days.

"We have always called for the lifting of the blockade," Russian Prime Minister Vladimir Putin told Agence France Presse in an interview.

Spain, which currently holds the rotating EU presidency, has said it will soon unveil a proposal for lifting the blockade, while France has suggested the European Union inspect the cargoes of ships heading to Gaza as well as maintain a presence at the Rafah border crossing with Egypt.

Hamas said on Tuesday that it is not opposed to the idea of EU inspections provided there is no interference by Israel.

The closure of the Gaza Strip prevents all but basic goods from entering the territory and severely limits the ability of Palestinians to travel in and out.

Israel has recently authorized the delivery of snacks and some other previously restricted goods into Gaza, a Palestinian official said on Wednesday.

But Israel maintains an embargo on many badly needed construction materials and industrial goods.

Israel says the blockade is necessary to contain Hamas, which is sworn to the destruction of the Jewish state, and to prevent the smuggling of weapons. Critics slam it as "collective punishment" of Gaza's 1.5 million residents.(AFP)