David Hockney Goes Back to His Roots 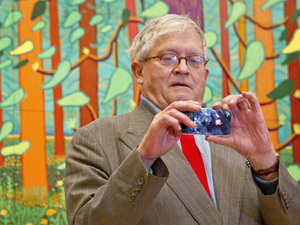 Britain's greatest living artist, David Hockney, has swapped the Californian sunshine for the landscape of his native Yorkshire for a blockbuster exhibition which goes on show this week.

Hockney has portrayed country lanes and hedgerows in a riot of color that leaps off the wall at the Royal Academy of Arts, a short walk from Piccadilly Circus in London.

In the show, "A Bigger Picture", Hockney and his team also show the countryside shifting through the seasons on a giant bank of video screens using film recorded by a bank of nine cameras mounted on a jeep.

In a bold move for a man who turns 75 in July, he has adopted the iPad as a tool for his art, finding it a perfect way of capturing a moment quickly before the light changes.

The man once renowned for paintings of swimming pools in his adopted California admits that with age he has found intense pleasure in sights he once took for granted.

"It's a landscape I know from my childhood, it has meanings. I never thought of it as a subject 10 years ago," he said in a press conference in September to launch the exhibition.

"And I realized at my age it's a terrific subject."

Visitors to the show of 150 paintings are first assailed by a giant canvas filling an entire wall, entitled "The arrival of spring in Woldgate, East Yorkshire, in 2011" and showing a path leading through trees in bloom.

It sets the tone for the exhibition, which was born out of the death of a close friend.

Hockney first returned to Britain for six months in 1997 to be close to the friend, Jonathan Silver, who was terminally ill.

Driving from his mother's home in the sleepy seaside resort of Bridlington to his friend's bedside, he became enthused by what he saw.

In 2004, he decided to make the move more permanent and took up residence in his mother's house -- she died in 1999 at the age of 98 -- and started an intensely productive period.

Farmers on their tractors and passing motorists would slow down to get a closer look at the man smoking furiously and dabbing at a canvas, regardless of the weather.

Hockney makes no secret of his contempt for younger artists such as Damien Hirst who admit that assistants do much of the painting for them.

Promotional material for the exhibition pointedly states: "All the works here were made by the artist himself, personally.

"It's a little insulting to craftsmen, skillful craftsmen... I used to point out at art school, you can teach the craft, it's the poetry you can't teach. But now they try to teach the poetry and not the craft," Hockney told the Radio Times magazine.

Hockney has not turned his back completely on California -- a whole room of the London show is dedicated to iPad paintings of the Yosemite National Park, blown up massively, in which the artist's skill with his new toy shines through.

The curator of the exhibition, Marco Livingstone, makes no apologies for the strong colors that Hockney has imagined in the sometimes drab Yorkshire countryside.

"The colors are sometimes very bold, they might seem exaggerated because he sees with such intensity," he told Agence France Presse.

"The more you see, and the more intensely you experience it, the more pleasure you get from it, so for him it's very important to exaggerate a bit for the sake of that experience."

The exhibition runs from January 21 to April 9.