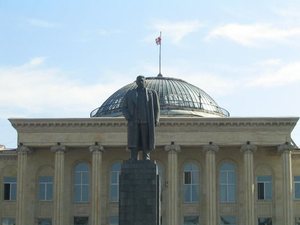 Twenty years after the USSR collapsed, Georgia's fervently pro-Western government regards the Soviet Union as a repressive dictatorship and has been trying to erase its legacy.

But perhaps inconveniently for the administration of President Mikheil Saakashvili, the USSR's most notorious leader Joseph Stalin was born as Joseph Dzhugashvili in 1878 in the provincial Georgian town of Gori.

In 2010 the authorities removed a huge bronze statue of Stalin which had stood in Gori's main square since 1952.

Yet the gloomy state-run Stalin Museum full of old portraits, photographs and memorabilia owned by the former Soviet leader has been allowed to remain open in the same square as a tourist attraction, and the road on which it stands is still signposted as Stalin Avenue.

Several dozen pensioners gather there each year to remember the Soviet Union's most notorious leader but their nostalgia is at at odds with the government view of Stalin as a mass killer and the USSR as an oppressive regime that occupied Georgia for seven decades.

"The fall of the Soviet Union is definitely something to celebrate, a great historical event which set Georgia free," said a senior lawmaker from the governing party, Petre Tsiskarishvili.

A law was adopted this year banning the public display of Soviet symbols and prohibiting former Communist and KGB officials from holding public office. An annual "Soviet Occupation Day" was also launched -- a commemoration of the Red Army invasion in 1921 which forced independent Georgia into the USSR.

"It is important to make our country free of the symbols of its oppressors," Tsiskarishvili said.

Its attitude is in stark contrast to that of its former Soviet master Moscow, where the USSR is still venerated by Russia's leaders as a great state that was not compatible with the modern world.

The Georgian authorities have made it clear what kind of hero they prefer, erecting a statue of former US president Ronald Reagan last year in Tbilisi, where a main road is also named after former US leader George W Bush.

But while Georgia tries to win membership of NATO and integrate more closely with Europe, the transition from Soviet-era thinking to a more Western mentality in the small Caucasus country will take time, some analysts suggest.

"As a state and as a government, Georgia has completely distanced itself from the Soviet legacy. But at a mentality level, traces of the Soviet legacy are sometimes still visible within society and at an individual level," said Tornike Sharashenidze of the Georgian Institute of Public Affairs.

Kremlin rule ended in 1991 but Georgia's former colonial masters are still regularly accused of trying to reassert control, after two Moscow-backed rebel provinces seceded and Russia fought a brief war with Georgia in 2008.

"Mentally and politically, Russia cannot live with the fact that Georgia is independent and is constantly trying to undermine our sovereignty," said lawmaker Tsiskarishvili.

But Russian Prime Minister Vladimir Putin has accused Georgia of trying to rewrite history in its haste to exorcise the ghosts of the USSR.

"This is yet another attempt to erase from the collective memory of the people of the former Soviet Union the memory of their common past and of their heroic history," Putin said after the Georgian authorities demolished a Soviet World War II memorial in 2009.

Although analyst Sharashenidze insists "there is no nostalgia for the Soviet past in Georgia", some pensioners who have struggled in poverty since the USSR's collapse still remember the Communist period and its social welfare system with warmth.

Around 70 elderly Communists gathered this year at the small brick house which the dictator lived in as a child to remember the man they call "the Great Stalin", carrying red flags, bouquets of flowers and a framed portrait of their idol.

"Of course the fall of the Soviet Union was a tragedy. We lived well under socialism, better than we live now," said a local Communist, Merab Kirtadze.

But Georgia's few Communists retain no political influence or popular support, and the ageing Stalin admirers who rally each year in Gori increasingly look like relics of a past which their country is determined to leave behind.

For them, however, the Soviet period remains a golden era and their countryman a powerful and victorious leader.

"The USSR was a great empire and Stalin was its greatest hero," said Merab Kirtadze at the dictator's birthday memorial. "We will never forget his name and we will always praise his memory."