Air Canada to Lay Off More than 5,000 Flight Attendants 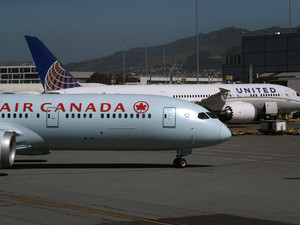 Air Canada plans to temporarily lay off more than 5,000 flight attendants due to the new coronavirus pandemic, their union said Friday.

That accounts for more than half the membership of the Air Canada component of the Canadian Union of Public Employees, which represents roughly 10,000 flight attendants.

"This has been the most challenging time any of us will likely ever experience as flight attendants," union president Wesley Lesosky said in a statement.

Air Canada confirmed it has begun discussions with its unions on temporary layoffs, but did not say how many of its employees would be affected.

In a statement, it attributed the decision to lay off employees to the "rapid evolution" of the new coronavirus pandemic and the reduction in service it has caused.

"When conditions permit and service resumes, these employees will be recalled," the airline said.

On Wednesday, the airline said it planned to gradually reduce its domestic and US transborder flights by March 31, after Canada temporarily closed its border with the United States to contain the spread of the virus.

Its international service has been reduced from 101 destinations to just six, while its cross-border operations have been cut to just 13 destinations from 53.

Air Canada continues to serve domestic destinations but has reduced to 40 airports from 62.

Also in the Canadian aviation sector, Longview Aviation Capital, the parent company that produces the Dash 8-400 and Series 400 Twin Otter, announced it was suspending production activities on the aircraft, affecting 980 employees.