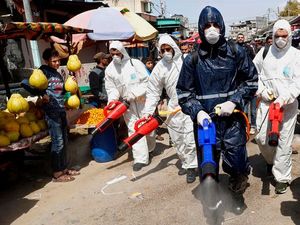 Authorities in Gaza on Sunday confirmed the first two cases of novel coronavirus, identifying them as Palestinians who had traveled to Pakistan and were being held in quarantine since their return.

The United Nations has warned that a COVID-19 outbreak in Gaza could be disastrous, given the high poverty rates and weak health system in the coastal strip under Israeli blockade since 2007.

Following the confirmed cases, a World Health Organization (WHO) delegation arrived in Gaza to assess the situation, a Palestinian security source said.

Gaza's health ministry said the two people who tested positive had been held in quarantine since their return from Pakistan on Thursday and had not interacted with the wider population.

"These two cases were recorded among those who returned to Gaza ... (and) did not mix with the residents of the Gaza Strip," deputy health minister Yousef Abu Al-Reesh told reporters.

The sick, identified as two men, were in stable condition, the health ministry said.

Israel has enforced a blockade on Gaza since 2007, when Islamist group Hamas seized control of the territory.

Israel argues the measures are necessary to isolate Hamas, considered a terrorist organisation by most Western countries.

Israel and Hamas have fought three wars since 2008.

Movement in and out of the territory -- which was severely restricted by Israel and Egypt before the pandemic -- has tightened in response to the coronavirus threat.

Authorities in Gaza have said that more than 2,700 Palestinians are in home-isolation, mostly people who had returned from Egypt.

A civilian group called the Al-Shajaiyah initiative hit the streets of Gaza City on Sunday after the cases were confirmed, working to clean the street with sanitizing spray.

"We in the Gaza Strip have been under siege for 14 years and the possibilities (to protect ourselves) are very limited," said Ahmad Al Wadya, a doctor helping to coordinate the effort.

The head of the WHO's Palestinian office, Gerald Rockenschaub, told AFP this week that Israeli restrictions and political tensions have caused Gaza's health facilities to deteriorate over the past decade.

Gaza has only 60 intensive care unit (ICU) beds for its two million people and not all are operational due to staff shortages, he said.

In response to the pandemic but before the Gaza cases were confirmed, Israel had announced an increased supply of medical equipment to Gaza, according to the branch of the Israeli military responsible for civilian affairs in the Palestinian Territories, COGAT.

Hamas authorities are also working to build up to 1,000 new isolation rooms near the Rafah crossing with Egypt.

Matthias Schmale, the Gaza director of the United Nations agency for Palestinian refugees, UNRWA, told AFP this week that it would be "an illusion to think you can manage (an epidemic) in a closed-off space like this."

"Everything I am hearing is if the outbreak reaches the magnitude where you need more than 60 ICU beds to treat, it will become increasingly difficult and could well turn into a disaster of gigantic proportions," he said.

Palestinians suffering from cancer and other serious diseases are currently allowed to leave Gaza through Israel for treatment inside the Jewish state or in the occupied West Bank.

It is not yet clear if Israel, which has imposed tight restrictions on its own population in response to the pandemic, will allow seriously ill coronavirus patients to be transferred from the Strip.