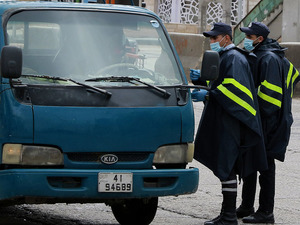 More than 1,600 people have been arrested in Jordan in three days for violating a curfew aimed at stemming the spread of coronavirus, a security official said Tuesday.

The source said the 1,657 people arrested across Jordan since the curfew came into effect on Saturday had been placed in quarantine centers run by the army.

The government has warned that people caught breaking the rules would be quarantined for 14 days and could also face up to one year of jail time.

The kingdom reported 26 new cases of the COVID-19 illness on Tuesday, bringing the total number to 153 confirmed infections in the country of around 10 million people.

To date, authorities have not declared any deaths from the disease.

Jordan imposed a curfew after citizens failed to heed instructions not to leave home except for emergencies, and it has deployed the army to enforce the measure.

In the capital on Tuesday, a fleet of 190 buses chartered by the municipality started to deliver bread directly to homes, while pharmacies and water distributors have been authorized to make home delivery sales.

Jordan has also banned travel between provinces, sealed off Amman and suspended public transport and flights.