On the 10th Day of Lockdown, Madrid Shaken by Deaths 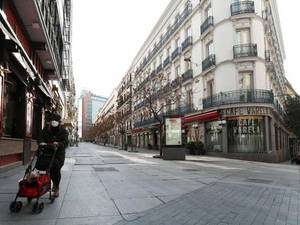 At the foot of the skyscrapers in Madrid's business district, the streets are empty as the city silently marks day 10 of lockdown to halt the spread of the coronavirus.

The only signs of life are those coming and going at a nearby hospital where another five people died overnight, raising the body count to 1,535 in the Madrid region.

The coronavirus epidemic has hit particularly hard in this normally bustling city of 6.5 million, where ambulances now sweep through its wide streets and boulevards without even sounding their sirens as they rush ever more people to hospital.

Spain has so far lost 2,696 people to the virus, with 60 percent of the deaths in Madrid and the surrounding region.

At the gates of La Paz university hospital in the north of the city, staff are unloading dozens of bottles of oxygen as doctors wearing masks and gloves come and go from a recently-erected white tent.

"The (reception) tent opened yesterday for possible COVID-19 patients and those with mild symptoms," explains a spokeswoman.

"Our staff are up to their eyes in work. We've been getting protective suits and masks but we're still short."

After completing a night shift in the hospital's A&E department, Guillen del Barrio sounds completely empty as he relates what happened overnight.

"It is really hard, we had feverish people for many hours in the waiting room, sometimes we had to give them oxygen, some of them very old people," he told AFP by telephone.

"Just in A&E we had five people die of coronavirus overnight, the 30-year-old added..

"Many of my colleagues were crying because there were people who are dying alone, without seeing their family for the last time, and we hardly even had time to keep them company."

"It reminded us that we are very much in danger," said Del Barrio whose partner is a nurse who "has tested positive and is at home in quarantine."

For him, the main thing is to recognize the importance of the public health system.

"The number of beds have been reduced a lot because of budget cuts during the economic crisis," said Del Barrio, a union member.

"And right now we are really missing all those nurses and doctors who went to work abroad."

Inside the city's vast IFEMA exhibition hall, the army has rapidly set up "the biggest hospital in Spain" -- a field hospital with an intensive care unit which may eventually accommodate up to 5,500 patients and where ambulances can be seen going in and out.

Just two kilometers (less than a mile) down the road, red trucks carrying soldiers in protective suits can be seen driving into the Palacio de Hielo (Ice Palace) shopping center, whose ice skating rink is being used to store dead bodies because the city's morgues are overwhelmed.

In front of a nearby building, several undertakers are cleaning their hands after unloading a body from their grey lorry.

"This one died a normal death," not due to coronavirus, one of them explains.

"It's crazy, we have so much work," he adds, before being hurried away by his colleagues.

In the city center, however, postmen are still delivering letters, bakers are selling bread and newspapers kiosks remain open.

"I'm not selling anything, it means people are being very careful and going out very little," shrugs Carlos Garcia at a newsstand in the city's famed Puerta del Sol.

Now deserted, the huge square is normally buzzing with life, with tourists snapping pictures of the towering statue of a bear grasping onto a strawberry tree -- the emblem of the city.

"Am I afraid? No. If I was afraid, I wouldn't be here," said this white-haired 58-year-old. "But I do worry about my family because nobody knows where this virus will strike next."

Under the lockdown, Spain's 46 million population has been ordered to stay home with people only allowed out to buy food or medicine, to walk the dog or in limited cases, to go to work.

"The city is desolate," says Jesus Santa Rosa, a 33-year-old Venezuelan who is delivering food by bike.

"I have to work to be able to send something back to Venezuela. I got here only a month ago and now I'm working through an epidemic."

Near Gran Via, in the middle of a pedestrianized street without pedestrians, a group of construction workers are standing around a cement mixer.

"Building and renovation work is still going on," sighs Ruben Sanchez, 42, who manages the site.

"Why don't they just shut it down?" he wonders. "I'm in charge but I'd much rather be at home."