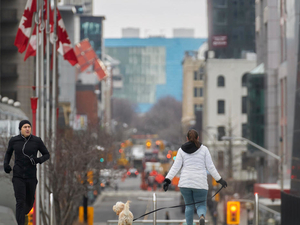 Thirty-two members of Parliament, proportionally representing each party instead of the full 338, gathered in Ottawa for a vote on the emergency measures.

Parliament had been suspended from March 13 through April 20, but reconvened only to approve the cash injection to help individuals and businesses.

At a news conference, Conservative leader Andrew Scheer said his party supports the Can$82 billion (US$57 billion) in aid to help Canadians through this pandemic -- including nearly one million who have been laid off following temporary closure orders given to many businesses.

But he said he can't back a Liberal "power grab."

"We will authorize whatever spending measures are justified to respond to the situation but we will not sign a blank cheque," he said in a statement.

Trudeau said the controversial clause in the bill would be nixed, but continued to press for capabilities to respond quickly to new developments in the spread of the virus.

Backing from the Bloc Quebecois assures the government bill's passage. But getting the cash quickly to Canadians -- by early April -- required unanimous support.

"This pandemic is moving extremely quickly and it is an exceptional situation that requires extreme flexibility and rapidity of response by governments to be able to help Canadians and react to a situation we've seen is moving quickly every single day," Trudeau said at his daily briefing.

Closed-door negotiations ensued late into the evening, but by 0230 GMT Wednesday there was still no deal to get the aid package out the door.

The measures included Can$27 billion in direct support for families and businesses and Can$55 billion in tax deferrals.

Canada has almost 2,800 cases of the COVID-19 illness and 27 deaths, according to a tally by Johns Hopkins University.