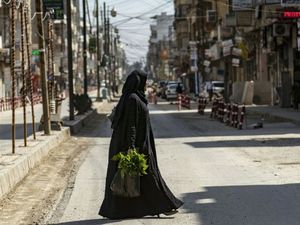 Deprived of cross-border aid and already low on medical supplies, northeast Syria is grappling with the threat of a virus outbreak that aid groups and officials fear could ravage the region.

Home to sprawling displacement camps hosting some 100,000 people, including the families of the Islamic State group, the Kurdish-held northeast has yet to declare a single infection.

But with the region severely under-equipped, local officials have started to sound the alarm after Damascus announced the country's first coronavirus case on Sunday.

"Even before the novel coronavirus arrived, our needs were huge, and now, in light of the outbreak, we need even more support" from the international community, said Jawan Mustafa, head of the Kurdish administration's health department.

"We don't have the means to do this on our own."

Nine years of war have battered healthcare across Syria, but the situation in the Kurdish-held northeast is particularly critical, especially in massive displacement camps such as Al-Hol, which is home to tens of thousands of people.

Unlike Syria's rebel-held northwest, where UN aid enters via Turkey, the northeast is deprived of cross-border channels for UN medical assistance.

Deliveries from within Syria, on the other hand, require permission from the central government in Damascus, which has yet to extend relief.

"With the UN no longer able to provide medical supplies from across the border, the ability of many humanitarian organisations to meet the healthcare needs of those in camps such as Al-Hol... has already been compromised," the International Rescue Committee warned Monday.

Mustafa of the Kurdish administration said nine centres across the northeast are being equipped to hold suspected cases.

The IRC said three hospitals among these have been identified to quarantine and treat suspected cases, but two of them are not fully equipped.

Only 28 beds are available in intensive care units across these three hospitals, and only two doctors trained to use the scarce ventilators available, the organisation said.

Mustafa echoed similar concerns, adding that the region does not have access to diagnosis tests.

As a result, samples from suspected cases were being sent to labs in Damascus for testing, rendering the Kurdish authorities increasingly reliant on the help of a regime bent on stripping them of the semi-autonomy they have achieved during Syria's war.

But displacement camps, according to the health official, are the gravest concern.

"The camp is, in and of itself, a social gathering and this is the problem," he said.

To prevent the virus from reaching the overcrowded settlements, Mustafa said officials have restricted the entry of relief workers except in urgent cases.

In the event of an actual outbreak, a large tent in each settlement will be transformed into a quarantine zone, he added.

"There isn't much else we can do."

Amid the alarm, the Kurdish administration on Monday enforced a 15-day lockdown.

"The risk of a virus outbreak here is very high," warned Mazlum Abdi, the head of the Kurdish-led Syrian Democratic Forces, urging residents to stay home.

But the United Nations children's agency UNICEF has warned that water cuts are further putting hundreds of thousands at risk of contracting the coronavirus.

The Allouk water station near Ras al-Ain, a border town controlled by Turkey and its Syrian proxies, has not pumped water to the region for days in an interruption that a war monitor and the state news agency SANA blame on Ankara.

Both the Syrian Observatory for Human Rights and SANA accuse Turkey of deliberately turning off taps at the pumping station, which UNICEF said supplies water to around 460,000 people at a time when hygiene can save lives.

"The interruption of water supply during the current efforts to curb the spread of the coronavirus disease puts children and families at unacceptable risk," UNICEF's Syria representative Fran Equiza said.

"Uninterrupted, reliable access to safe water is essential to ensure children and families in the area don't have to resort to unsafe" sources, she said.

According to SANA there are no viruses or deseases in Syria so whats the concern?
Heck they probably deny a civil war is ongoing there....

France has proposed the delivery of health supplies to Syria by 155mm howitzer shells. Germany has requested time to study the proposal for ecological and financial effects.
Takfiri Relations Minister in the French Government, HRE Philippe Macron, called the proposal "stimulating . . . exciting."