Ethiopia to Release Thousands of Prisoners to Limit Coronavirus Spread 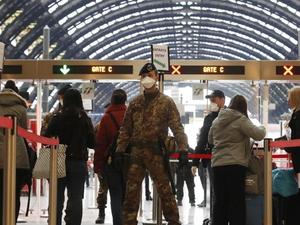 Ethiopia announced Wednesday it would free thousands of inmates from the country's overcrowded prisons as part of a bid to curb the spread of the coronavirus.

Attorney General Adanech Abebe told state media the measure would apply to more than 4,000 prisoners, many of whom are locked up for "petty crimes" and drug offences or have less than a year remaining on their sentences.

"Considering the nature of the transmission of the virus and to end the overcrowding in prisons, the cases of 4,011 prisoners have been discontinued and given pardons," Adanech said, adding that the releases would begin Thursday.

Conditions in Ethiopia's prisons are "harsh and in some cases life threatening," marred by "gross overcrowding and inadequate food, water, sanitation, and medical care," according to the latest annual human rights report on Ethiopia from the US State Department.

As of Tuesday evening, Ethiopia had confirmed 12 cases of COVID-19, the disease caused by the coronavirus, after conducting 480 laboratory tests, according to the Ethiopian Public Health Institute.

Prime Minister Abiy Ahmed has ordered a number of measures to prevent widespread transmission of the coronavirus, including shutting land borders and limiting overcrowding in buses and taxis.

But Abiy's appeals for Ethiopians to practice social distancing have fallen on deaf ears in some quarters, as large crowds continue to form in the capital, Addis Ababa, for religious ceremonies and other events.

Ethiopia has stopped short of imposing the kinds of lockdowns seen elsewhere on the continent.

Also on Wednesday, Abiy's office announced the creation of a national committee tasked with "gathering financial and non-financial materials for COVID-19 emergency preparedness."

Abiy said on Twitter he would donate one month of his salary to the initiative.