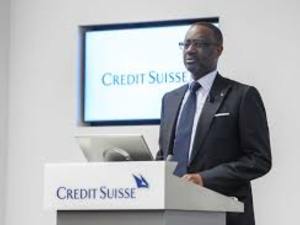 Tidjane Thiam resigned from the helm of Switzerland's second-largest bank last month amid revelations that Credit Suisse had spied on a former top executive and other employees, even though an internal probe found he was not personally responsible.

Thiam, who has been replaced by former Swiss division chief Thomas Gottstein, was paid a base salary of three million Swiss francs ($3.1 million, 2.8 million euros), but received a range of bonuses and other payments, bringing the total to 10.7 million francs.

The payout he received in terms of non-financial assets was adjusted down after spying allegations against the bank came to light, and he ended up pocketing 15 percent less in total than a year earlier.

The scandal broke last September, with the discovery that surveillance had been ordered on Iqbal Khan, a star banker and former wealth management chief.

Khan was tailed after he jumped ship to competitor UBS amid concerns he was preparing to poach employees and clients.

An initial investigation blamed former chief operating officer Pierre-Olivier Bouee, who stepped down in October, but found no indication the rest of the top brass, including Thiam, were involved or even aware of the spying activities.

Thiam has steadfastly maintained he had know knowledge of the spying activities.

Credit Suisse also pointed out that there was "no evidence of his direct participation in the observation matter".

Credit Suisse said it planned to go ahead with its general assembly as planned on April 30, but that special precautions would be taken due to the COVID-19 pandemic.