Italian Village where Virus is Deadlier than War 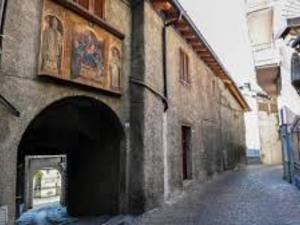 The obituaries posted on a board where the newspapers might otherwise hang tell the story of an Italian village living through a disaster the mayor calls "worse than the war."

The war Vertova mayor Orlando Gualdi refers to is World War II -- a cataclysmic event more and more Italians cite while describing the damage wrought by the coronavirus pandemic.

Italy's death toll is somewhat hard to grasp when they are read out every evening in Rome. The total across the country soared to 6,820 by Wednesday.

But the village -- its ancient stone houses hugging the side of a mountain 70 kilometers (45 miles) northeast of Milan --- has 4,600 inhabitants and usually sees around 60 deaths the entire year.

"It's worse than the war," Gualdi told AFP in one of the village's empty squares.

Four freshly made coffins are bunched together near the entrance of a chapel nearby.

They are waiting to be cremated and then buried in the cemetery in the back.

Funerals have been banned for weeks and the ceremony will be a muted affair attended by caretakers wrapped in protective suits and masks.

The cemetery itself remains closed to the villagers because public gathering are banned -- so grieving for your loved ones with flowers at their grave is no longer allowed.

"No one deserves such a horrible death," the mayor said.

"It is absurd to think that there could be such a pandemic in 2020."

Vertova and the city of Bergamo to its south are at the epicenter of the Italian outbreak.

The rates of deaths and infections here are currently some of the highest in the world -- and worse than those officially reported out of China's Hubei province.

And anyone who does step outside is wearing a mask -- even if they might not be fresh ones.

"Unfortunately, there aren't any masks left in the village. There is no more disinfectant," 63-year-old Augusta Magni said.

"I had to make my own mask with a piece of cloth and a sewing machine."

Another local says that almost everyone in the village knows someone who has been touched by the virus in some way.

"Each one of us has relative, friends and loved ones who've been infected," sales agent Claudio Bertocchi said.

But not everyone is downbeat.

Children's drawings of rainbows and a message reading "Everything will be fine!" hang from some windows.

And the government-run National Research Council reports that 57 out of Italy's 107 provinces have already hit their peak of the virus's spread.

Italy's numbers are improving "and the containment measures are delivering the desired effect, even if we are in the initial phase of the slowdown," the research council said.

But the village mayor is still counting the dead.

"Thirty-six deaths between March 1 and today," he said.

"Only then do you understand the magnitude of what's happening here."