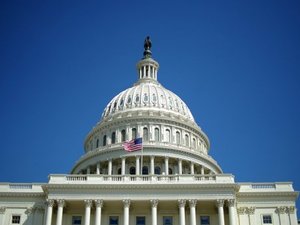 Dozens of U.S. lawmakers on Monday threw their support behind efforts to allow remote voting in Congress, as members seek to have their say on critical legislation from home or quarantine during the coronavirus pandemic.

While 67 House Democrats signed a letter urging the rules committee to upend two centuries of Capitol Hill tradition and allow voting from outside the chamber during national emergencies, the movement has gained traction in both political camps.

Bipartisan measures recently have been introduced in the Senate and House of Representatives, and have taken on urgency as three lawmakers have tested positive for coronavirus and at least a dozen others entered self-imposed quarantine as a precaution.

"I totally support the idea of remote voting so the Senate can continue to operate during this crisis," Republican Senator Lindsey Graham tweeted Monday, as Congress considers new restrictions on Capitol gatherings.

"We should make this change before the Senate leaves town" for Easter recess in early April, he said.

Under longstanding rules, all voting in Congress is done in person, despite the existence of mobile voting technology for the past two decades.

But recent developments have highlighted the risks of bringing dozens or more lawmakers together in an enclosed area.

Republican Rand Paul on Sunday became the first senator to test positive for new coronavirus, and he and four other Republican senators are now in quarantine.

Trump signaled he favors remote voting, saying Sunday "I would be totally in favor of it on a temporary basis."

Congresswoman Kathleen Rice was among several Democrats pressing for the rules change.

"Congress must be allowed to vote remotely so we can safely and quickly pass legislation to combat the coronavirus outbreak and provide relief to those who need it," Rice tweeted.

Rice and 66 other Congress members signed a letter backing a resolution spearheaded by House Democrat Eric Swalwell, who warned of public health risks if members are required to travel to and from Washington, vote, and then return to their communities during a pandemic.

"We need to provide a mechanism through which Congress can act during times of crisis without having to assemble in one place," Swalwell wrote.

The pandemic is upending voting on multiple levels. Rhode Island on Monday became the eighth state to postpone its Democratic presidential primary.

An effort to require all states to allow emergency voting by mail has Pelosi's support.