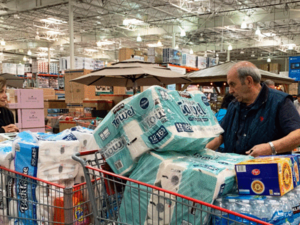 From quarreling couples to toilet paper hoarding, life under coronavirus lockdown across much of the United States has provided comedy material for those seeking light-hearted relief in these difficult times.

More than 50 percent of Americans are under some form of lockdown, while regular TV comedy staples such as Saturday Night Live are on hiatus, prompting many to turn to internet memes for amusement.

Short-form video platform TikTok has 1.3 million videos dedicated to a new coronavirus song -- including dance routines with synchronized coughs. #Boredathome clips of people twerking, planking and dressing up in giant Pikachu outfits to break the monotony have been viewed 2.1 billion times.

Another TikTok video of a hamster perched on its hind legs appearing to "wash" its hands inside a tiny doll's house has been viewed more than 800,000 times.

"It is truly sad that a hamster just genuinely offered more useful public health advice in one 12-second TikTok than the president has in multiple addresses to the nation," quipped comedian John Oliver, broadcasting his "Last Week Tonight" show from an empty studio.

Like Oliver, several late-night comedy hosts have taken to broadcasting online from sealed-off settings, including their own homes.

Stephen Colbert appeared live from his own bathtub, counseling viewers to "look on the bright side -- you're finally going to get a chance to binge watch all that toilet paper you bought."

"Based on my current level of inactivity and stress baking, I definitely will not be flattening my curves," added the host of CBS's "The Late Show."

Trevor Noah renamed his Comedy Central program as "The Daily Social Distancing Show," advising viewers anxious about President Donald Trump's handling of the crisis to "binge-watch the first eight years" of the Obama presidency instead.

Less established comedians, many of whom depend on live stand-up shows for a living, have reached new audiences online -- with many jokes again revolving around the pandemic.

Comedians Taylor Tomlinson and Sam Morril began dating in real life just before the crisis, and their series of short, scripted videos about being confined together has had tens of thousands of views.

"Don't enter a brand new, long-distance relationship right before a pandemic," wrote Tomlinson on Instagram alongside the first video of "New Couple Gets Quarantined."

Gus Johnson's video entitled "People who are going to parties right now" racked up over 1.65 million YouTube views, lampooning the selfishness of young people who mistakenly believe they are immune to the virus.

Online comedy sketch group Smosh published an episode entitled "Every Quarantine Ever," featuring a heavy-set man's desperate struggle to get off the couch and do a single pushup, and a woman making small talk to a stranger on the phone, including "So how much toilet paper do you have?"

Even more august institutions like the New Yorker magazine have got in on the act, publishing a tongue-in-cheek lifestyle column called "Some Coronavirus Guidelines" which mocks the contradictory advice circulating.

"There's no need to panic ... Stress is so normal that most Americans are feeling it right now. Which is a perfectly healthy response mechanism," it begins.

"And by 'healthy' we mean incredibly dangerous ... The good news is that if you continue worrying you can avoid contracting the virus entirely by dying of a premature heart attack."