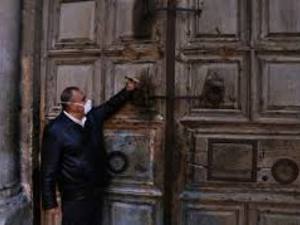 Jerusalem's Church of the Holy Sepulcher, believed by Christians to house Christ's tomb, was shut Wednesday, as Israel tightened movement restrictions and the Palestinians announced their first novel coronavirus death.

The church, located in Jerusalem's Old City, was closed shortly after 5:00 p.m. (1500 GMT), as Israel applied a series of new restrictions meant to curb the spread of the virus, including shutting down places of worship.

"We have been informed of the closure. Our understanding is that it is for one week. We hope (the church) will reopen as soon as possible," said Wadie Abunassar, a spokesperson for the local clergy.

The new restrictions in Israel, announced in a statement from Prime Minister Benjamin Netanyahu's office, prohibited leaving one's home except to buy essentials, such as food and medicine, or to seek medical treatment.

"Individuals aged 60 and over, especially the elderly and at-risk groups, must remain at home and avoid risking themselves by going out," the statement said.

"Violating the prohibitions will constitute a criminal offense" it added, noting that police were tasked with enforcing the orders, which will be in place for seven days.

The number of Israelis who have tested positive for the COVID-19 disease reached 2,369 on Wednesday evening. Five people have died in recent days after contracting the virus.

Palestinian authorities in the occupied West Bank reported the territory's first death from the virus on Wednesday, with 60 cases recorded so far.

The Palestinian Authority on Sunday banned all non-essential movements for 14 days to curb the spread of the virus.