Russia to Ground all International Flights from Midnight 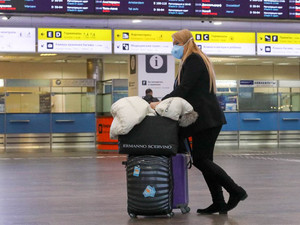 Russia will halt all international flights from midnight on Friday under a government decree listing new measures against the coronavirus outbreak.

The decree published on Thursday orders aviation authorities to halt all regular and charter flights, with the exception of special flights evacuating Russian citizens from abroad.

Russia's civil aviation agency Rosaviatsiya will halt "regular and charter air travel from Russian airports to airports of foreign states and back," according to the decree published on the government's website.

The grounding starts at midnight Friday, or 2100 GMT Thursday.

The decree said that flights authorised by the Russian government would be exempt from the rule. The new measures do not apply to domestic flights within Russia.

The government said Russians who were unable to return due to restrictions imposed by countries they are in should take measures to stay safe.

The decree also called on the finance ministry to allocate funds to repatriate Russians, adding that returnees would be subject to health checks and a two-week quarantine.

In a rare televised address to the nation Wednesday, President Vladimir Putin said he was postponing a national vote on April 22 to green light constitutional reforms that would allow him to run for two more terms after 2024.

He also took the unusual step of declaring March 28 to April 5 a non-working week in order to slow the spread of the virus, urging Russians to stay at home.

Putin also unveiled measures to boost the economy, including breaks on consumer loans and mortgage payments.

The country closed borders to foreigners last week, while Moscow has imposed its own stricter measures, requiring people over 65 to shelter at home.