U.S. Indicts Maduro for 'Narco-Terrorism', Offers Reward for His Arrest 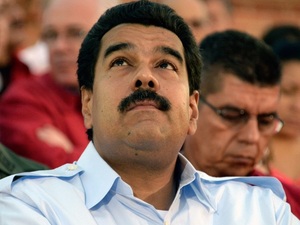 The U.S. Justice Department announced indictments Thursday of Venezuelan President Nicolas Maduro and top members of his government for "narco-terrorism."

U.S. officials said Maduro was the leader of a cocaine trafficking group called "The Cartel of the Suns" that involved senior politicians and members of the Venezuelan military and judiciary, including the country's chief justice.

Attorney General Bill Barr said they shipped out 200- to 250 metric tons of cocaine under the protection of the Venezuelan government.

Separately, the State Department announced a $15 million reward for the arrest of Maduro, whom Washington does not recognize as the country's legitimate leader.