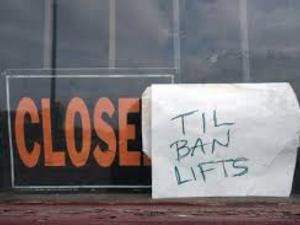 With streets in major cities empty, and shops and restaurants forced to close due to the coronavirus pandemic, there was a record explosion of Americans filing for unemployment benefits.

A staggering 3.3 million workers filed claims in the week ending March 21, the highest ever recorded, the Labor Department said Thursday, in a report that laid bare the devastating impact of the health crisis on the U.S. economy.

The data lend credence to warnings that the overall U.S. unemployment rate will likely spike into the double digits, although that may not be immediately apparent in the March figures given the way the rate is calculated.

"I've been writing about the U.S. economy every day since 1996, and this is the single worst data point I've ever seen, by far," said Ian Shepherdson of Pantheon Macroeconomics, who correctly forecast initial jobless claims would pass the three million mark.

Economists are projecting the pandemic-induced shutdowns could lead to a staggering 14 percent contraction of the US economy.

The Conference Board on Wednesday said unemployment could rise to as high as 15 percent later this year -- far beyond the 10 percent peak hit in October 2009 during the global financial crisis.

- Fed, Congress to the rescue -

Gregory Daco of Oxford Economics said the outlook is grim: "The U.S. economy will experience the largest economic contraction on record with the most severe surge in unemployment ever."

The U.S. Senate has approved a $2.2 trillion economic rescue package that includes an unprecedented expansion in unemployment benefits to try to cushion the blow until the pandemic is under control -- and businesses can reopen.

The bill would increase weekly payments by $600 and expand them to more workers who were ineligible before, including those who are self-employed or work in the gig economy, which could amount to more than 15 million.

The House of Representatives is expected to vote on the measure on Friday,  and President Donald Trump has pledged to sign it quickly.

"It protects all American workers," Treasury Secretary Steven Mnuchin said Thursday on CNBC, calling on lawmakers to pass the bill quickly -- and do so unanimously.

"The American workers and American public and American business, they need the money now. So this is not the time to debate a bill that passed with every single vote."

The package also provides cash payments of $1,200 for many Americans, and grants to small- and medium-sized businesses, as well as huge amounts for major industries like airlines that have been hit hard by the crisis.

The Federal Reserve also has been rolling out all its firepower, slashing the benchmark interest rate to zero earlier this month and launching a host of initiatives, including unlimited purchases of U.S. Treasury debt and mortgage debt and lending to companies and municipalities, to keep the U.S. financial system from freezing up.

"When it comes to this lending, we're not going to run out of ammunition. That doesn't happen," Powell said on NBC.

But forecasters say these efforts cannot stave off a recession -- and are only the first steps in dealing with the crisis.

"Fed action and fiscal measures can only ameliorate the pain, and we remain worried that the latter aren't yet on a sufficient scale," Shepherdson said, adding that $2 trillion "is a lot, but more will be needed, soon."

While economists unanimously warn about a massive increase in the jobless level, the all-important government employment report for March will not capture the full impact: the data are based on the pay period that includes the 12th of each month, which for this month came before the massive shutdowns.

The March jobs report is due out on April 3, but the April report, set for release May 8, is likely to be the one that shows a surge in the unemployment rate from the current 50-year low of 3.5 percent.