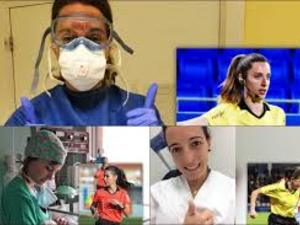 "I'm just doing my bit," says Iragartze Fernandez, the part-time referee turned full-time nurse who has swapped the whistle for a face-mask in the hope of helping Spain combat the deadly coronavirus.

The 26-year-old, who officiates matches in La Liga Iberdrola, the top tier of the women's game, and Segunda B, the third tier of the men's, has been practicing as a nurse for five years at the Rekalde Health Center in Bilbao.

But as the relentless spread of the virus has stretched Spain's hospitals to breaking point, Iragartze Fernandez has made her medical role full-time to help manage the rush of patients.

"When someone arrives with a cough and a fever, my job is to analyse their symptoms, while wearing full protective equipment," she told AFP.

"The risk of us transmitting the disease is high because we are constantly living next to it. That's a very stressful experience because you're always fighting against something you can't see. You're always playing at a disadvantage."

Spain now has the second most deaths of any country in the world, behind only Italy, with more than 4,000 lives taken by the pandemic, according to the latest figures on Thursday.

Football has stepped forward, as coaches, players and fans have raised millions to boost the effort while clubs have offered up their first-class facilities in a bid to ease the strain.

Yet Iragartze Fernandez is among the few from the sport to take her place on the fight's frontline.

"I'm not Superwoman or anything like that," Iragartze Fernandez says. "I'm just doing my bit, like everyone else."

Spain is now 11 days into official lockdown, with another two weeks at least to come, after the state of alarm was extended earlier this week.

With people concerned, frightened and frustrated, Iragartze Fernandez says her encounters in hospital can turn ugly, something she admits she is accustomed to from her work on the football field.

"Maybe in football, we talk about it more," she says. "But as a nurse, I have to take a lot of abuse as well from people who maybe don't want to queue or who want to be examined first because they think their situation is more serious than the person next to them."

Yet Spain has shown solidarity too since the population went into collective confinement. Every night at 8pm, residents all over the country step out onto their balconies and applaud to salute the work of those in the health industry, like Iragartze Fernandez.

"All that applause every night, it's incredible," she says. "I've been working in the same medical centre for two years and to be honest, no one has ever said thank you until now. It's really heart-warming to see our work is being recognised."

Spanish football has been suspended until further notice and she misses not only the game but the distraction from a job that is now all-encompassing.

"Playing sports is usually my escape. At work, we live with the coronavirus, we rub shoulders with it. I come home, I turn on the TV and now we only talk about that," she said.

"The only thing to really disconnect is sport. It helps me forget everything."

Iragartze Fernandez is not the only one, with Judit Romano, an assistant referee in Segunda, the second tier of men's football, now working as an anesthesiologist in the resuscitation department of Oviedo's Central University Hospital of Asturias.

Elena Pelaez, a referee in La Liga Iberdrola, is working as a midwife at the Rio Carrion Hospital in Palencia.

But despite their strenuous timetables, Iragartze Fernandez said the Spanish Football Federation are keen to ensure they all stay as sharp as possible.

"They send us videos and tests with decisions to make," she said. "We also have physical exams to pass, with suggestions according to the equipment we have at home, like if we don't have elastic bands or exercise bikes. We adapt."

And she is looking forward to blowing the whistle to start her first game back. "When I think about football in the little free time I have left, I miss it," she said. "I miss matches, I miss the competition and of course most of all, refereeing. I miss all of it."