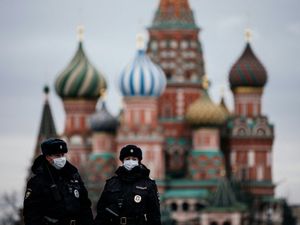 Russia on Tuesday expanded a lockdown to curb the coronavirus outbreak as parliament rushed to approve tough legislation for violating quarantine rules and spreading false information.

Out of 85 regions of the world's largest country by landmass, more than 40 moved to introduce a lockdown including the Primorsky Krai on the border with China in the east and the exclave of Kaliningrad in the west.

Moscow, Europe's most populous city with more than 12 million residents, took the lead on Monday, with authorities ordering people to stay home, with a few exceptions for emergencies.

Russia, which has a population of 144 million people, on Tuesday reported 2,337 coronavirus cases and 17 fatalities but the real number of the infected is believed to be higher.

Over the past 24 hours authorities have reported 500 new cases -- the biggest daily increase so far --- with most registered in Moscow, which has become the epicentre of the outbreak in Russia.

President Vladimir Putin on Monday defended the tough new measures as justified and warned that if entertainment venues were not closed across the country regional officials might face "criminal negligence" charges.

If a quarantine dodger were found guilty of causing a person's death or intentionally infecting many people, they would face up to five years in prison, and up to seven years if two or more people died.

By the end of the day the State Duma was also expected to approve draft legislation  imposing severe punishment -- including up to five years in prison -- for people convicted of spreading false information about the coronavirus and other life-threatening circumstances.

Lawmakers also rushed through a bill allowing the government to introduce a state of emergency across the country.