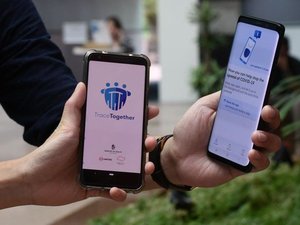 Thousands of people in Austria have downloaded an app to help track their contacts touted as a way to fight the spread of the new coronavirus, the Austrian Red Cross said Thursday.

The "Stopp Corona" app has so far had more than 130,000 downloads, a Red Cross spokesman told AFP, in a country of 8.8 million.

The app, which was launched last week, allows people to track who they have been in contact with -- and will then notify them if one of their contacts has contracted the virus.

The Red Cross is planning to further develop the app to include more features, such as a symptom check allowing users to key in their symptoms to see if they match those resulting from infection with the novel coronavirus.

The app could be especially useful once strict confinement measures are lifted, allowing more people to start coming into contact with others again, said the spokesman.

Countries around the world -- particularly in East Asia -- have developed similar tracking apps in an effort to trace the virus's spread, although critics have expressed data protection and privacy concerns.

The Red Cross says users are given a universally unique identifier (UUID) unless they are infected, in which case their mobile number is saved for 30 days.

Justice Minister Alma Zadic has dismissed concerns that individuals will be put under surveillance and said she was planning to download the app herself.

As of early Thursday afternoon Austria had recorded 10,877 cases of infection and 158 deaths among those who contracted the virus.