Prince Harry and Meghan to Start Non-Profit in US 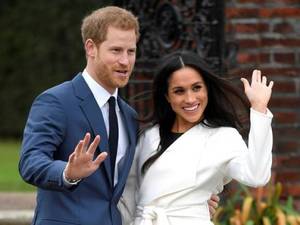 The Duke and Duchess of Sussex, who formally stepped down as senior members of the British royal family last week, told the Daily Telegraph newspaper they were establishing the organisation in the United States, where they are now based.

The charitable organisation will include emotional support groups, a multimedia educational empire and a wellbeing website among other things.

The couple filed paperwork for their new venture in the US last month, the Telegraph said.

They have delayed releasing full details about it because of the coronavirus pandemic and will make an announcement "when the time is right", they told the paper.

Their proposals are for "a vast and ambitious array of projects" under the name Archewell to replace their previous "Sussex Royal" brand, it added.

The couple have agreed to relinquish the label and their "Royal Highness" titles as part of the terms agreed for their departure from the frontline of the British monarchy.

The new name is derived from the Greek word Arche, meaning "source of action", and was reportedly the inspiration behind the name of their 11-month-old son, Archie Mountbatten-Windsor.

The couple relocated to California last month, according to reports, after announcing in January that they intended to quit royal life and "work to become financially independent".

The decision means they will no longer carry out duties on behalf of Queen Elizabeth II and are giving up their office within the monarchy in Britain.

The move followed reports Meghan was unhappy with life inside the centuries-old institution and both of them had complained about media intrusion.

Their sudden announcement rocked the royal family, appearing to blindside the queen and other senior family members.