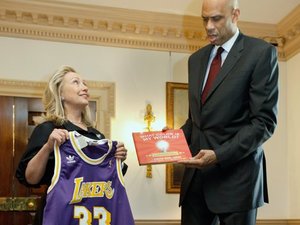 In a week-long trip to Brazil that starts on Sunday, Abdul-Jabbar will begin his new role to meet with young people and promote diplomacy and opportunities for greater cultural understanding between nations.

"I'm excited and honored," Abdul-Jabbar said. "I really appreciate the opportunity. I remember when Louis Armstrong first did it back for President (John) Kennedy, one of my heroes, so it’s nice to be following in his footsteps."

Abdul-Jabbar will participate in youth basketball clinics in Rio de Janeiro, host city of the 2016 Olympics, and Salvador, and stress education, social and racial tolerance, cultural understanding and sports as a means of empowerment.

"I look forward to meeting with young people all over the world and discussing ways in which we can strengthen our understanding of one another through education, through sports, and through greater cultural tolerance."

Since retiring from the NBA in 1989, Abdul-Jabbar has focused on African-American history and socio-economic justice.

"We're thrilled that you have agreed to do this," Clinton said. "I'm just very grateful to you for taking the time."