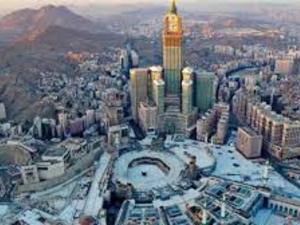 Saudi Arabia on Sunday partially eased a 24-hour curfew in place to combat the coronavirus pandemic, except for in hotspots including the Muslim holy city of Mecca.

The curfew will be relaxed between 9am and 5pm and malls and retailers will be allowed to reopen in all regions of the kingdom until May 13, the official Saudi Press Agency reported.

But a round-the-clock lockdown will be maintained in some areas including Mecca, which has reported the kingdom's highest number of infections in recent days despite being sealed off.

Many countries around the Middle East and North Africa have announced a similar easing of lockdown restrictions as Muslims mark the holy fasting month of Ramadan.

Saudi Arabia, which has reported the highest number of infections in the Arab world, is scrambling to limit the spread of the disease at home.

On Saturday the health ministry said deaths from the respiratory illness had risen to 136, while confirmed infections rose to 16,299 with 2,215 people reported to have recovered from the illness.

Authorities are yet to announce whether they will proceed with this year's hajj, scheduled for the end of July, but they have urged Muslims to temporarily defer preparations for the annual pilgrimage.

Last year, some 2.5 million faithful traveled to Saudi Arabia from across the world to participate in the hajj, which Muslims are obliged to perform at least once in their lives if able.

The Arab world's biggest economy has also closed cinemas, malls and restaurants and halted flights as it attempts to contain the virus.

King Salman has warned of a "more difficult" fight ahead against the virus, as the kingdom faces the economic impact of virus-led shutdowns and crashing oil prices.