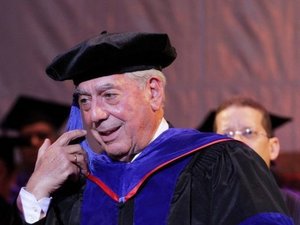 Madrid would like the Peruvian-Spanish author to occupy the new post of president of the institution, which would involve representing it throughout the world, Foreign Minister Jose Manuel Garcia-Margallo said.

If the 75-year-old accepts the post, the day-to-day running of the cultural body, which operates 77 centers in 44 countries, would be left to the institute's executive board, he added.

"He has everything that is needed," Garcia-Margallo told reporters at an awards ceremony at the Israeli embassy in Madrid.

"If Mario Vargas Llosa accepts the proposal, it would be a success for all of Spain and Latin America."

The Spanish government has not set a deadline for the author to make up his mind, the foreign minister said.

Vargas Llosa won the 2010 Nobel Prize for Literature. His works include "Aunt Julia and the Scriptwriter" and "Death in the Andes".

The author was born in Peru and has held Spanish citizenship since 1993. He lives part of the year in Madrid.