Rain Floods Syria Streets on 'Day of Rage', Not Protesters 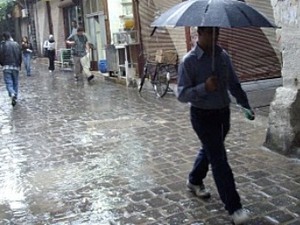 Rain, not protesters, flooded the streets of Damascus on Friday after Muslim prayers when a "day of anger" had been promoted by online activists in an echo of Egypt's popular uprising.

For a week, Facebook activists had touted Friday as the day they would mark a peaceful "2011 Syrian revolution" to "end corruption and tyranny."

The group's page had amassed over 12,000 'likes' on the social networking platform by early Friday.

But while the protesters in Egypt were rocking the streets of their cities for an 11th straight day calling for President Hosni's Mubarak resignation, their revolutionary chants had no audible reverberations in Damascus.

The streets within the walled Old City were quiet on Friday afternoon without a protester in sight. Only security agents had showed up in higher than usual numbers to monitor the capital's main arteries, an Agence France Presse reporter said.

"Syrian dissidents, including Kurds, did not respond to this call because they are convinced protests would be inefficient under the current conditions," said Abdel Karim Rihawi, president of the Syrian League for the Defense of Human Rights.

Calls to stage a sit-in Thursday in front of the parliament in Damascus to show "solidarity with students, workers and penniless pensioners" also rung hollow after a zero-turnout.

U.S.-based rights group Human Rights Watch reported that a gang of 20 people in civilian clothes had beaten and dispersed 15 demonstrators holding a candlelight vigil in the Christian part of the Old City on Wednesday.

In a statement issued in New York on Friday, it called for the Syrian authorities to "respect" the right of its people to protest.

It said it was told by one of the organizers of the protests that the Syrian security services showed up at each event, filmed the participants and checked their identity papers.

Suheir Atassi, one of the main organizers, was quoted as saying that the security services contacted her family last week and urged them to pressure her to cease her activities.

She told Human Rights Watch that she was insulted, slapped and threatened by police, who accused her of "working for Israel".

"President Bashar al-Assad seems to have taken a page out of the rulebook of his Egyptian counterpart," HRW said.

"His security services are no longer content with simply banning protests. They seem to be encouraging thugs to attack peaceful demonstrators," it said.