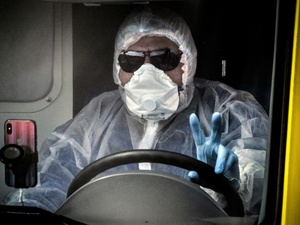 Russia on Saturday reported its largest increase in coronavirus cases with the new infections rising by nearly 10,000 in a single day.

The official fatality rate is low in comparison to countries like Italy, Spain and the United States, however.

Fifty seven people died over the past 24 hours, bringing the total death toll to 1,222.

Moscow mayor Sergei Sobyanin said the Russian capital, which has emerged as the epicentre of the contagion, was not yet past the peak of the outbreak.

"The threat is apparently on the rise," Sobyanin said on his blog earlier Saturday.

Sobyanin also said about two percent of Moscow residents -- or more than 250,000 people -- have the coronavirus.

"According to screening tests of various population groups, the real number of the infected is around two percent of Moscow's total population," Sobyanin said.

According to official statistics, Moscow has a population of 12.7 million but the real figure is believed to be higher.

Sobyanin said Moscow had significantly ramped up testing capacity, adding the city has managed to "contain the spread of the infection" due to the enforcement of stay-at-home rules and other measures.

The health ministry said on Friday that the number of infected children was on the rise. Two children had died from the coronavirus and 11 more were in a serious condition.