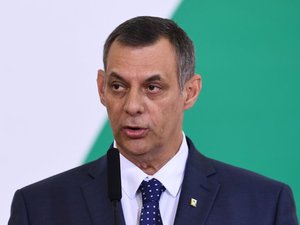 Army General Otavio Rego Barros, 59, one of the administration's top public figures, "is home following all recommended protocols" after his positive test result was confirmed Tuesday, the president's office said in a statement.

Bolsonaro himself says he tested negative.

But he has not publicly released his test results. One of Brazil's leading newspapers, Estado de Sao Paulo, is suing to force their release, arguing the president's health is a matter of public interest.

A federal judge ruled in the newspaper's favor Wednesday, rejecting the government's appeal of an earlier ruling. Further appeals look likely, however.

Bolsonaro has condemned the "hysteria" around COVID-19.

He says social distancing measures are needlessly hurting the economy, and regularly flouts them himself, hitting the streets in Brasilia and working the crowd in close quarters at rallies by his supporters.