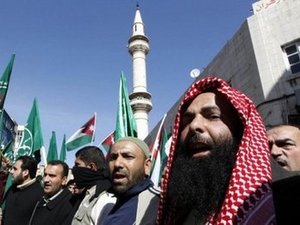 Around 1,000 protesters gathered on Friday outside the Jordanian prime minister's office to demand reforms, before staging a sit-in near Cairo's embassy in support of anti-regime protests in Egypt.

The demonstrators, answering calls by the powerful Islamic Action Front (IAF), the political arm of the country's Muslim Brotherhood, chanted: "The people demand reform and change."

"We want freedom, not martial laws. We need a government for the poor. We want electoral law that satisfies the young and old," they said under the rain as they carried national and IAF flags after midday prayers.

They then left the prime minister's office and marched to the Egyptian embassy nearby, holding banners reading: "We salute and support the great Egyptian people."

Separately, more than 100 people also marched in the city center, calling for political reforms in Jordan.

He instructed his new premier to "take practical, quick and tangible steps to launch true political reforms," but the IAF criticized the monarch's choice, saying Bakhit was not a reformist.

Abdullah held talks with the Islamists on Thursday night, during which he told them that the country's "reform drive has decelerated and stumbled, which cost the country a lot of chances to achieve progress," according to a palace statement.

But he pledged "serious steps" for change.

The Islamist leaders on the IAF website described the talks with the monarch as "frank" and added that they had touched on "various national problems, notably political reform, a modern and democratic electoral law ... which will lead to the formation of a parliamentary government."

The Islamists want the constitution to be amended to allow the head of the parliamentary majority to become de facto prime minister. The 1952 constitution gives the king sole prerogative in appointing and removing premiers.

Bakhit, a career soldier and former premier, is expected to announce his government on Saturday or Sunday.