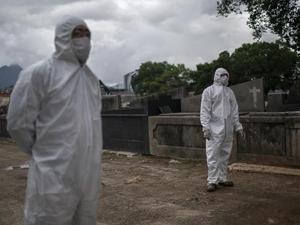 Brazil, the country in Latin America that has been hardest hit by the coronavirus crisis, said Friday it had reached a new daily record for COVID-19 fatalities with 751 deaths.

The announcement by the health ministry puts Brazil's total death count at nearly 10,000.

The state is Brazil's top industrial hub. It closed schools and non-essential businesses on March 24, and has extended its stay-at-home order through the end of May.