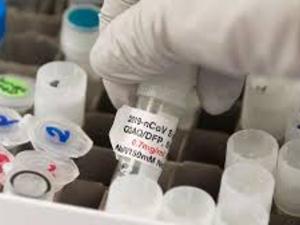 U.S. authorities warned Wednesday that Chinese hackers were attempting to steal coronavirus data on treatments and vaccines, adding fuel to Washington's war with Beijing over the pandemic.

The FBI and the Cybersecurity and Infrastructure Security Agency (CISA) said organizations researching COVID-19 were at risk of "targeting and network compromise by the People's Republic of China."

They warned that Chinese government-affiliated cyber actors and others were attempting to obtain "valuable intellectual property and public health data related to vaccines, treatments, and testing from networks and personnel affiliated with COVID-19-related research."

"China's efforts to target these sectors pose a significant threat to our nation's response to COVID-19," they said.

The two organizations gave no evidence or examples to support the allegation.

But the warning added to the growing battle between the superpowers over the outbreak that began in China and has killed at least 293,000 worldwide, and more than 83,000 in the United States.

President Donald Trump has accused China of hiding the origins of the virus and not cooperating with the United States and other countries in efforts to research and fight the disease.

Asked on Monday about reports that the U.S. believed Chinese hackers were targeting U.S. vaccine research, Trump replied: "What else is new with China? What else is new? Tell me. I'm not happy with China."

The warning Wednesday also underscored that Washington believes China has continued broad efforts to obtain U.S. commercial and technology secrets by any means possible, under President Xi Jinping's drive to make his country a technological leader this decade.

The U.S. recently also charged a number of academics with crimes relating to that alleged effort, both American and Chinese nationals.

On Monday the Department of Justice announced the arrest of University of Arkansas engineering professor Simon Saw-Teong Ang for hiding ties to the Chinese government and Chinese universities while he worked on projects funded by NASA.

The indictment said Ang was secretly part of the Xi-backed Thousand Talents program, which Washington says China uses to collect research from abroad.

Also on Monday Li Xiaojiang, a former professor at Emory University in Atlanta, admitted tax fraud in a case focused on his hidden earnings from China, also as a participant in the Thousand Talents program.

"We are leading the world in COVID-19 treatment and vaccine research. It is immoral to target China with rumors and slanders in the absence of any evidence," Foreign Affairs ministry spokesman Zhao Lijian said Monday.

The FBI warning comes as dozens of companies, institutes and countries around the world are racing to develop vaccines to halt the spread of the coronavirus.

Many more groups are researching treatments for infected patients. Currently there is no proven therapy.

An effective vaccine could allow countries to fully reopen and potentially earn millions of dollars for its creators.

Most expert believe it will take more than a year to get a vaccine fully approved, and much longer to produce enough of it for even a fraction of the people on the globe.

The warning about Chinese hackers added to a series of alerts and reports accusing government-backed cyber operators in Iran, North Korea, Russia and China of malicious activity related to the coronavirus pandemic, from pumping out false news to targeting workers and scientists.