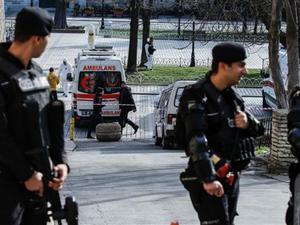 Five more mayors from Turkey's main pro-Kurdish party were detained on suspicion of links with militants and replaced by government-appointed trustees, the interior ministry said on Friday.

Of a total of 65 Peoples' Democratic Party (HDP) mayors returned in March 2019 elections, 45 have now been replaced by unelected officials, with some detained on terror charges.

"The Erdogan regime once again showed its hostility to the will of the Kurdish people," the HDP wrote on Twitter, referring to President Recep Tayyip Erdogan.

The mayors of the cities of Siirt and Igdir in eastern Turkey were removed and detained on suspicion of being a member of an armed terror group, the ministry said in a statement.

The ministry added that the mayors of Kurtalan and Baykan districts in Siirt province were suspended along with Altinova town mayor in Mus province.

The mayors of the three districts had been taken into custody as part of investigations into whether they had produced "terror propaganda" among other accusations, it said.

Turkey accuses the HDP -- the country's third-largest party -- of links to the Kurdistan Workers' Party (PKK), which has fought an insurgency against the state since 1984.

The PKK is banned as a terrorist group by Ankara and its Western allies.