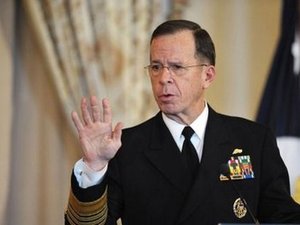 The U.S. military's top officer on Friday cautioned against moves to cut off aid to Egypt due to the unrest against the government of President Hosni Mubarak.

"I would just caution against doing anything until we really understand what's going on," Admiral Mike Mullen said in an interview on ABC News.

Mullen was asked about a possible freeze to the vast U.S. military and economic aid to Egypt, a move that Republican Senator John McCain has said is under consideration.

"That's not mine to decide," said Mullen. "But at the same time, I'd like to understand a little bit more about what's going on before we took any specifics."

For years Egypt has been the second largest recipient of U.S. foreign aid after Israel -- with 1.3 billion dollars annually in military assistance.

U.S. officials believe that years of training and instruction for Egyptian officers at American defense colleges has helped shape attitudes in the military, making them reluctant to use force against their compatriots.

Aside from hardware, the aid has "established a relationship ... of great strength" between the U.S. and Egyptian military, Mullen said.

"And there's some intangibles associated with that, tied to how they handle themselves and how they focus and what they understand about who they should be, which are very, very positive."

Mullen described the U.S. military aid to Egypt as "an investment that's paid off over a long period of time."

McCain is leading a growing chorus of calls in the U.S. Congress for Mubarak to step down immediately, a stiffening of criticism for the longtime U.S. ally.

In another interview on Thursday, with "The Daily Show with Jon Stewart," Mullen said Egyptian officers had "reassured" him their forces will not fire on protesters.

He said he was working to keep communication channels open with the Egyptian military -- a pivotal player in the crisis -- and expressed hope for an end to violent scenes on the streets.

"I mean in the discussions I've had with their military leadership, they've reassured me that they have no intent to fire on their own people," he said.