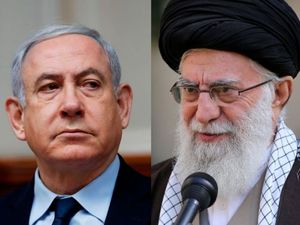 "He should know that any regime that threatens Israel with extermination will find itself in similar danger," Netanyahu wrote on his official Twitter feed in Hebrew.

He was responding to comments posted on Twitter by Khamenei on Wednesday in Farsi, English and Arabic.

"Eliminating the Zionist regime doesn't mean eliminating Jews. We aren’t against Jews," Khamenei wrote, explaining that what he meant was to "expel thugs like Netanyahu".

"This is 'eliminating Israel'," he added.

"The Zionist regime is the most evident example of state terrorism," Khamenei also wrote, saying that since the foundation of the Jewish state, Zionists "have been acting like a cancerous tumor, furthering their goals by massacring children, women and men".

US Secretary of State Mike Pompeo condemned the comments.

"They have no place on Twitter or on any other social media platform."

Pompeo made an eight-hour visit to Israel last week, during which he accused Iran of using its resources to "foment terror" even as its people face the Middle East's deadliest novel coronavirus outbreak.