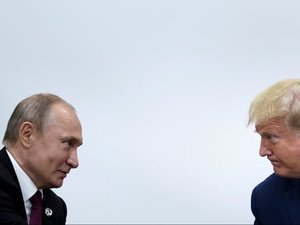 Russia will observe the Open Skies treaty as long as it is in force, a Russian deputy foreign minister said Friday after President Donald Trump announced the US will withdraw.

"We need a pragmatic approach. As long as the treaty is in force, we intend to fully follow all the rights and obligations that apply to us from this treaty," Deputy Foreign Minister Alexander Grushko told RIA Novosti news agency.

Trump announced Thursday he plans to pull the United States out of the Open Skies Treaty with Russia and 32 other countries, the third arms control pact the US president has abrogated since coming to office.

Trump told reporters: "Russia did not adhere to the treaty"

"So until they adhere, we will pull out."

The treaty permits one country's military to carry out a certain number of unarmed surveillance flights per year over another country at short notice.

Its aim is to boost mutual understanding and confidence.

The treaty came into force in 2002. It is seen as an important instrument in international arms control.

Grushko said that Russia was "acting on the basis that all the other countries will act in the same way," and "take a conscientious approach to the obligations of parties to this treaty."

The Russian diplomat said Thursday that the US pullout would damage European security and harm the interests of US allies.