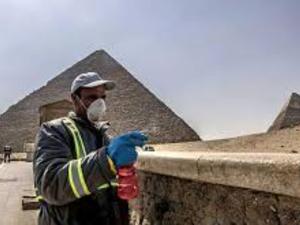 Egypt's cabinet has preliminarily approved a bill that taxes one percent of citizens' salaries to cushion the impact of coronavirus on strained government finances, sparking online criticism.

The draft law -- due to come into effect from July, pending parliamentary approval -- imposes the deductions across the public and private sectors on employees with monthly net incomes above 2,000 Egyptian pounds (around $125).

"All governments across the world give out money to their people except for Egypt" to help cushion the effects of coronavirus, said one Twitter user. Instead, the Egyptian government "reaches into the pockets of Egyptians to take 1 percent."

The bill also stipulates a 0.5 percent effective tax on state pensions to help "confront some of the economic repercussions resulting from the spread of coronavirus," the cabinet said in a statement this week.

On Facebook, some citizens alleged that depriving pensioners of part of their income was "unconstitutional."

The draft law provides for a possible exemption of those "working in sectors that were economically harmed due to the coronavirus spread," the statement said, without elaborating.

The legislation has yet to be scrutinized by parliament and it will also require presidential assent to become law.

Dissent in Egypt is rare under President Abdelfattah al-Sisi, whose government stands accused by observers of stifling legitimate scrutiny.

An estimated 60,000 detainees in Egypt are political prisoners, according to rights groups.

Egypt's economy, like elsewhere, has been hit hard by the COVID-19 illness which has so far officially killed 696 out of 15,003 confirmed cases in the country.

In a bid to support the economy, the Egyptian government has begun to ease some confinement measures, including relaxing curfew hours and partially reopening some hotels.

Pyramids are expensive, especially when you use Bangladeshi, Filipino, and Sri Lankan labor: it takes them a long time to get used to the whip.