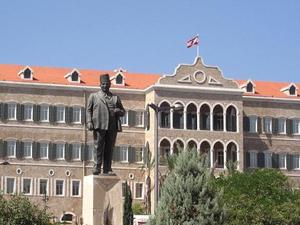 The crazy rise in prices of food supplies and the uncontrolled devaluation of the national currency will see an improvement “if the Central Bank governor keeps his promise and interferes,” al-Joumhouria daily reported on Saturday.

“The dollar rate to the Lebanese pound will largely improve if Central Bank governor Riad Salmeh keeps his promise and interferes effectively in the exchange market,” Grand Serail sources told the newspaper on condition of anonymity.

“An improvement will also be witnessed in terms of deterring parties manipulating the national currency whether they be money exchangers or else,” they added.

The sources emphasized that reducing food prices and halting the currency depreciation are a priority, in parallel with ongoing negotiations with the International Monetary Fund in order for Lebanon to get assistance for its stricken economy.

“Deterrent measures will be taken in the near future to prevent the fluctuation and insane rise in prices of consumer goods,” they stressed.

On Thursday, Prime Minister Hassan Diab said: “I have been given a promise from the governor of the central bank that the central bank will intervene in the market as of today to protect the Lebanese pound and to curb the high dollar exchange rate.”

Lebanon is facing its worst economic crisis since the 1975-1990 civil war, now compounded by more than two months of a coronavirus lockdown.

The local currency has lost more than half its value on the black market in recent months, from the official rate of 1,507 to more than 4,000 pounds to the dollar.

Poverty has soared to 45 percent of the population, and inflation is over 50 percent, according to official estimates.

The devaluation of the Lebanese pound has led to major hikes in the price of food, much of which is imported.

The central bank last month ordered exchange offices to cap the rate at 3,200 to the dollar, but the pound has continued to tumble.