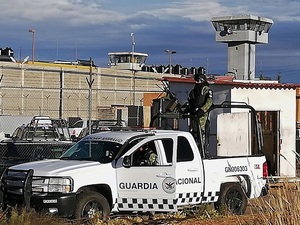 Eight inmates died after a brawl broke out in the high-security Mexican prison from which infamous drug trafficker "El Chapo" made his first escape, officials said Friday.

The fight began after the end of a baseball match between detainees at the Puente Grande jail near Guadalajara in the western state of Jalisco.

A small number of prisoners suddenly attacked another group, prison director Jose Antonio Perez said. The cause of the brawl was not known, he added.

Several wounded inmates were taken to different hospitals with one individual dying during the transfer, authorities said.

Five detainees suspected of participating in the deadly scuffle will be questioned by the prosecutor's office.

The top security prison was also where Joaquin Guzman, known as "El Chapo", in 2001 made the first of his jailbreaks -- reportedly by hiding in a cart of dirty laundry.