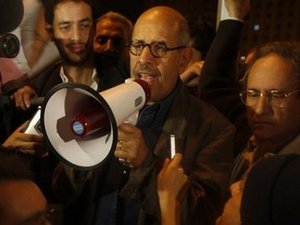 Leading Egyptian opposition figure Mohammed ElBaradei has announced that he would not run for president in the upcoming elections.

"No, I will not join in. The best I can do is act as an agent for change," he told Austrian newspaper Der Standard, when asked whether he would compete in presidential elections.

"Naturally I want to play a part in the future, but who stands in the election, that's really not so important at the moment," he added.

Asked about reports that Washington wanted Vice President Omar Suleiman to lead a transitional government and about the Egyptian people's possible reaction to such a move, the former U.N. atomic energy watchdog chief and Nobel peace laureate said many young protesters would see that as a mere extension of President Hosni Mubarak's term.

He stressed that the only solution was Mubarak's immediate departure.