Greece to Bolster Patrols on Border with Turkey 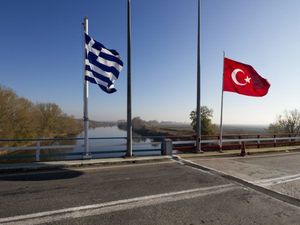 Greece will reinforce its police patrols on its border with Turkey, an official said Wednesday amid expectations of renewed migration pressure.

An additional 400 police will be sent to the northeastern Evros river border region "as a precautionary measure", police spokesman Thodoros Chronopoulos told AFP.

The border area was the scene of clashes in March after Turkey said it would no longer prevent asylum-seekers from reaching the European Union.

For days, there were skirmishes on the border as migrants, trying to break through, threw stones at Greek riot police who fired tear gas at them.

On Tuesday, Greek Defence Minister Nikos Panagiotopoulos told Skai TV that Athens was aware of "certain statements that suggest we will face pressure on our borders again, especially our land borders."

After the attempted asylum-seeker surge in March, Athens said it would extend a border fence, a move that has created a new dispute with Ankara.

Turkey says it should be consulted about the fence expansion, noting that the Evros riverbed "has significantly changed due to natural and artificial reasons" since the border was established in 1926.

Ankara says "technical coordination" is required, and that it would not allow any "fait accompli" on its border.

Greece counters that it is not obliged to consult Turkey about infrastructure on its own side of the border.

"We will proceed with the fence expansion. It is our constitutional obligation to protect Greek soil", said Foreign Minister Nikos Dendias.