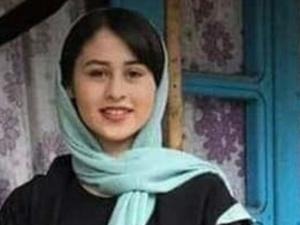 The killing of an Iranian teen by her father after she eloped with an older man sparked outrage on Wednesday, with local media denouncing "institutionalized violence" in "patriarchal" Iran.

According to local media, Romina Ashrafi was killed in her sleep on May 21 by her father, who decapitated her in the family home in Talesh in northern Gilan province.

The reports said her father had refused her permission to marry a man fifteen years her senior, spurring her to run away, but she was returned home after her father reported her.

The legal marriage age in Iran is 13 for women.

Iranian media reported that after authorities detained the teenager, she told a judge she feared for her life if she was returned to home.

But what most outraged public opinion was the lenient punishment the father is likely to face, Ebtekar wrote.

The newspaper notes that Iran's normal "eye for an eye" retributive justice does not apply to fathers who kill their children.

Accordingly, he is likely to face three to 10 years in prison, a sentence that could be reduced further, the newspaper wrote, denouncing the "institutionalized violence" of Iran's "patriarchal culture."

With the farsi hashtag #Romina_Ashrafi focusing outrage on Twitter, President Hassan Rouhani "expressed his regrets" in a cabinet meeting on Wednesday, pleading for the speedy passing of several anti-violence bills, his office said.

On Twitter, Vice President for Women and Family Affairs, Masoumeh Ebtekar, said a bill on the protection of young people was in the "final phase" of validation by Iran's Guardian Council.

The council, which vets legislation to ensure compliance with Iran's constitution and Islamic sharia law, has thrice previously called for changes to the law after it was passed by lawmakers, Ebtekar newspaper wrote.

The publication fears that if the council sends back the bill, it will be buried by Iran's new parliament, which held its first session Wednesday and is dominated by conservatives and hardliners opposed to Rouhani.