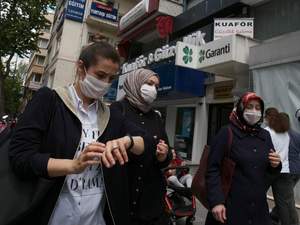 When Turkey had the highest number of coronavirus cases outside of Europe and the US in April, there were fears its health system could be overwhelmed and its death rate could rocket.

But more than a month later, Turkey is proclaiming that the pandemic has been contained, trumpeting a mortality rate of just 2.8 percent -- lower than neighbours Greece (six percent), Iran (5.4) and Iraq (3.5).

Officials claim the success is thanks to robust health infrastructure and a young population -- the median age in Turkey is 32.4 compared with 43.1 in the European Union.

Health Minister Fahrettin Koca has further boasted of the spare capacity in institutions, claiming on May 18 that intensive care units were less than 60 percent full and hospitals more than 60 percent empty.

For Koca, this was proof that the system was coping with the outbreak.

However, some health experts are reserving judgement.

Dcotor Kayihan Pala, a member of the Turkish Medical Association's COVID-19 group, said more transparency was needed around the figures.

Turkey had begun well, he said, but had failed to follow all the World Health Organization's reporting standards.

The country's official death toll, for example, includes only those who had tested positive for the virus.

Before the pandemic, Erdogan could be seen grandstanding at the openings of city hospitals, including what has been dubbed Europe's largest in the capital Ankara last year.

Hospitals have undergone a "structural transformation" over the past 20 years, said Cevdet Erdol, rector of the Health Sciences University and a former AKP lawmaker.

"These city hospitals have rooms for one, maximum two, people," he told AFP, saying they could be turned into isolated spaces for virus patients.

Erdol said the country had also made strides in domestic production of health equipment, adding: "When Turkey was in need, we produced ventilators within a month."

With confidence in the system riding high, Turkey began to send locally produced personal protective equipment (PPE) to other countries, engaging in what became known as "mask diplomacy".

Officials have continued to trot out reams of impressive-sounding figures -- just 4,400 virus deaths, far fewer than countries with smaller populations such as the Netherlands and Belgium.

The reproduction number was down to 0.72, according to the health minister last week, meaning the virus was no longer increasing its spread.

Erdogan's communications chief Fahrettin Altun tweeted that the "pandemic has been contained".

But Pala is unimpressed.

He accused the government of failing to provide enough protective equipment for Turkish health workers at the start of the crisis.

And he warned against triumphalism when a second wave of infections was still possible.

"I don't find it appropriate to declare a narrative of victory or not from a phenomenon where this many people have died," he told AFP.

Pala is not the only one to find fault with the government's handling of the crisis.

Erdogan was widely accused of prioritising the economy when he refused to impose the kind of restrictions that saw people shut in their homes for weeks in countries like France and Spain.

And his government's authority was damaged when officials botched the announcement of a curfew in April, giving just two hours notice and causing  hundreds of thousands to rush to buy groceries.

There was also criticism for allowing people to go on pilgrimage to Mecca in Saudi Arabia and then failing to quarantine them in time.

And without a full lockdown, some Turks -- particularly in the construction industry -- continued going to work, putting their lives and families at risk.

The Confederation of Progressive Trade Unions (DISK) last month said their members were three times more likely to be infected than the rest of the population.

Anglo-French Physicians (for World Peace) should remember that autopsies are required to show what someone died of. "No time to do autopsies" means you cannot say someone died of COVID just because they had COVID when they died. The vast majority of deaths associated with COVID are of people with other health problems. This may be a good way to sell newspapers for a short while, but people remember where they heard the truth.