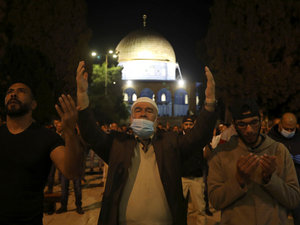 Jerusalem's al-Aqsa mosque compound, Islam's third holiest site, reopened on Sunday after being closed for over two months because of the coronavirus pandemic.

Dozens of worshipers in protective masks were let into the compound before the first prayers of the day, held in cool and windy conditions.

Chanting "God is greatest, we will protect al-Aqsa with our soul and blood," the worshipers who gathered in front of the large wooden doors were welcomed by mosque director Omar al-Kiswani, who thanked them for their patience.

The prayers followed a fraught previous day in annexed east Jerusalem, where the compound is located.

Israeli police on Saturday shot dead a disabled Palestinian they mistakenly thought was armed, prompting furious condemnation from the Palestinians.

The religious site, which houses Al-Aqsa mosque and the Dome of the Rock, had closed its doors in March as part of measures to limit the spread of COVID-19.

As part of ongoing efforts to tackle the virus, worshipers' temperatures were taken and staff distributed masks to those entering the compound. Tape inside the mosque and on the stones outside marked where people should pray at a safe distance.

Israeli soldiers were stationed at the gates to the site, which has often been a flashpoint in the Israeli-Palestinian conflict.

Muslims believe the Prophet Mohammed ascended to heaven there, and it is Islam's third holiest site, after Mecca and Medina.

Meanwhile, it is the holiest site for Jews, who refer to it as the Temple Mount, the reputed location of two biblical temples, the second of which was destroyed in 70 AD.

On the first day of the Eid holiday earlier this month, scuffles had broken out between Israeli police and Palestinians as worshipers tried to break through barriers to enter the compound.

The holiday marked the end of the holy month of Ramadan, during which Muslim leaders asked worshipers to pray at home.

"For me as a muezzin, when I say at the end 'pray in your homes', it breaks my heart," said Firas al-Qazzaz last month, whose family has led prayers at Al-Aqsa for more than 500 years.

Known to Muslims as the Haram al-Sharif, the site is under the custodianship of neighboring Jordan, which controlled the West Bank, including east Jerusalem, up until occupation by Israel in the Six-Day War of 1967.

With the number of COVID-19 cases declining, in recent days both Israel and the Palestinian territories have eased restrictions.

Fewer than 500 infections and just three deaths have been confirmed in the occupied West Bank and Gaza, which have a combined population of around five million.

Following the deadly shooting on Saturday, the Palestinian leadership demanded that whoever killed Iyad Khairi Hallak be brought before the International Criminal Court.

The incident happened in the alleys of the walled Old City near Lions' Gate, an access point mainly used by Palestinians, and police said they had opened an investigation.

Hundreds of people protested on Saturday evening outside the Jerusalem police headquarters and in Tel Aviv, carrying placards in Hebrew reading "Police violence kills" and "Justice for Iyad".

Photos of Hallak were published online alongside the hashtags #PalestinianLivesMatter and #Icantbreath, in reference to the American Black Lives Matter movement and US protests against racism and police violence.

There have been fears that Israeli plans to take advantage of a controversial green light from U.S. President Donald Trump to annex swathes of the West Bank could stoke further violence.