Few Tourists -- but No Gladiators -- at Rome's Colosseum 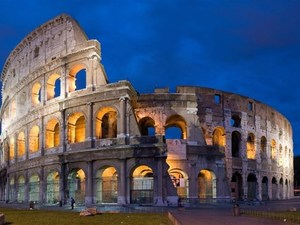 Rome's famed Colosseum reopened Monday after a three-month coronavirus lockdown but only a few hundred people were expected at Italy's top tourism site.

The massive amphitheater, which witnessed savage fights and the gory deaths of unlucky gladiators and wild animals centuries ago, was eerily silent as the first tourists passed through its gates with new health protocols in place.

Officials said they expected only 300 people -- a far cry from the thousands of selfie-taking tourists who jam-pack the stadium on a normal basis.

Also visibly absent were the modern-day gladiators usually parading outside, waving their plastic swords as they vie for tips for photographs.

Workers took advantage of the lack of crowds to patch up mortar, and a solitary cat was seen roaming on the main deck.

The Colosseum's director, Alfonsina Russo, said it had been "surreal" seeing the empty landmark during the quarantine, adding: "It's a symbol of Rome and of Italy.

"But the sense of emptiness highlighted the great beauty of this place and it's fragility," Russo told AFP.

Last year, an average of 20,000 tourists visited the Colosseum daily on a combined ticket with the Imperial Forum -- the site of ancient Rome's government and religious temples -- and the Palatine Hill, where the city's elite built their villas, thrown in.

Seventy percent of those tourists came from abroad.

On Wednesday, visitors from within the European Union will be allowed to travel for the first time to Italy, but borders remain closed to tourists from further afield.

Pierluigi, a Roman preparing to enter with his wife, said this was his maiden visit.

"We took advantage of the fact that foreign tourists aren't here yet," he said. "I'm excited at the idea of seeing it, being inside."

Another local, Luca, said he, his wife and daughter "wanted to see the old stones!"

He was surprised by the lack of crowds but conceded: "There's so much else to see in Rome."

Things were busier at the Vatican Museum on Monday, where hundreds awaited entry to see the Sistine Chapel and other papal treasures.

Italy's tourism sector is vital for the economy, accounting for about 13 percent of revenues. Museums were allowed by law to open on May 18, but many still remain closed as they await a greater influx of tourists.

Famous sites throughout Italy such as the ruins of Pompeii and Pisa's leaning tower have reopened in recent days.

On Tuesday, Florence's Uffizi Gallery and its Accademia, housing Michaelangelo's David, are set to welcome visitors once again.