Bolsonaro Threatens to Pull Brazil from WHO 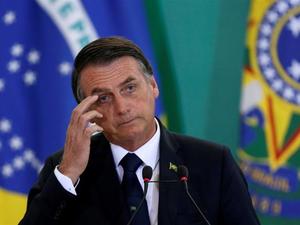 President Jair Bolsonaro threatened Friday to withdraw Brazil from the World Health Organization, following in the footsteps of his US counterpart, Donald Trump, accusing it of "ideological bias."

"I'm telling you right now, the United States left the WHO, and we're studying that, in the future. Either the WHO works without ideological bias, or we leave, too," the far-right leader told journalists outside the presidential palace.

Sometimes called a "Tropical Trump," Bolsonaro has followed a similar script to the US president in his handling of the coronavirus pandemic, downplaying its severity, criticizing state authorities' stay-at-home measures and touting the purported effects of the drugs chloroquine and hydroxychloroquine against COVID-19.

Trump announced a week ago he was terminating the United States' relationship with the WHO, accusing it of bias in favor of China, with whom his administration has clashed over the origin and handling of the pandemic.

Bolsonaro said it was no coincidence that days later, the WHO reversed its decision to suspend clinical testing of hydroxychloroquine for COVID-19.

The WHO had suspended trials of the drug after major studies raised concerns about its safety and effectiveness against the new coronavirus -- irking Trump, a hydroxychloroquine fan who even took the drug himself as a preventive measure.

On Thursday, most of the authors of the studies that appeared in The Lancet and the New England Journal of Medicine retracted their work, saying they could no longer vouch for their data after the firm that supplied it refused to be audited.

The WHO has resumed trials of the drug, which is traditionally used against auto-immune diseases and malaria.

Bolsonaro, however, put the reversal down to the WHO losing its more than $400-million annual contribution from the United States, its biggest funder.

"Trump cut their cash, and they back-tracked on everything," he said.

He made the statements shortly before Brazil announced its death toll in the coronavirus pandemic had risen above 35,000 -- though, in a change of format, the health ministry stopped reporting the total number of people killed, providing only the figure for the past 24 hours.

Brazil has the third-highest death toll in the pandemic, after the US and Britain.

The country of 212 million people has now confirmed more than 645,000 cases of the virus.