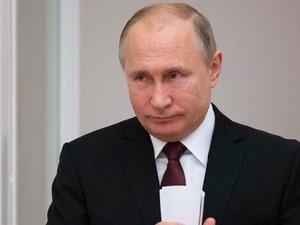 Early voting began in remote parts of Russia on Wednesday ahead of a referendum that could extend President Vladimir Putin's term in the Kremlin, despite coronavirus fears and rising infections.

Initially planned for April, the vote on constitutional reforms proposed by the longtime leader has been rescheduled for July 1.

Election officials in the isolated region of Chukotka in Russia's Far East announced they had dispatched employees to collect votes from deer herders in the tundra.

"Our colleagues will travel about 600 kilometres (370 miles) on all-terrain vehicles," local election official Elena Gorbunova said, according to TASS news agency, in order to collect ballots from around 87 people in the tundra.

The election chief in Yakutia, Alexey Efimov, said officials in the Siberian region would use motorboats and helicopters to organise voting for fishermen, meteorologists and residents working in mines.

He said around 8,000 residents were expected to vote ahead of the referendum.

The vote will clear the way for changes allowing Putin to potentially stay in power until 2036, as well as a series of other constitutional reforms.

It was the centrepiece of Putin's political calendar this year but had to be postponed from April 22 as coronavirus cases surged.

Russia has also rescheduled a massive military parade on Red Square due to be held last month for June 24 as authorities lift anti-virus measures.

Moscow, the epicentre of the pandemic in Russia with around half of the county's total cases, lifted quarantine rules on Tuesday, sending residents onto the streets and clogging major roads.

Health officials have recorded a steady daily increase of more than 8,000 new cases in past weeks even as the country returns to normal life.

Russia has a total of 493,657 infections, according to a government tally, the third-highest number of cases in the world after the United States and Brazil.

With 216 deaths reported over the last 24 hours and a total of 6,358 fatalities, Russia's mortality rate is far lower compared to other countries with large outbreaks.

Critics have cast doubt on the low official mortality rate and accused authorities of under-reporting to play down the scale of the crisis.